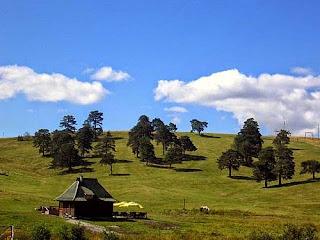 Zlatibor (Serbian Cyrillic: Ð—Ð»Ð°Ñ‚Ð¸Ð±oÑ€, pronouncedÂ [zlÇŽtibÉ"r]) is a mountain region situated in the western part of Serbia, a part of the Dinaric Alps.

Zlatibor is administratively divided into two municipalities within Serbia: ÄŒajetina and UÅ¾ice, in the Zlatibor District. The railroad Belgrade-Bar passes through Zlatibor.

The southern and the eastern border of Zlatibor are natural - the rivers Uvac and Veliki Rzav. In the west Zlatibor borders Bosnia - its villages of Mokra Gora, Semegnjevo and Jablanica mark the border. Zlatibor is located in the northern part of the Stari Vlah region, a historical border region between RaÅ¡ka, Herzegovina and Bosnia. The hill called Cigla near the village of Jablanica still has some borderline markings of the Kingdom of Serbia, Austria-Hungary and the Ottoman Empire. In the Middle Ages, Zlatibor was known as Rujno, a Å¾upa that was part of RaÅ¡ka. The name Zlatibor started to be used in the 18th century, but its etymology is uncertain. It probably stems from the Serbian words zlatni (golden) and bor (pine) â€" a particular type of a pine originates from the mountain, whose Latin name is Pinus sylvestris var. zlatiborica, and today is endangered. Situated at an elevation of just over 1,000 meters, Zlatibor is a climatic resort, characterized by a cool mountain climate, clean air, long periods of sunshine during the summer and a heavy snow cover in winter. Tourist facilities include modern hotels, holiday centers and cottages, sports grounds and skiing.