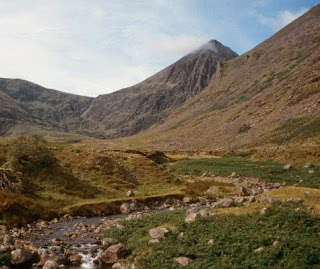 Carrauntoohil (/ËŒkÃ¦rÉ™nËˆtuËl/,Â Irish: CorrÃ¡n Tuathail) is the highest peak in Ireland. Located in County Kerry, it is 1,038 metres (3,406Â ft) high and is the central peak of the Macgillycuddy's Reeks range. The ridge northward leads to Ireland's second-highest peak, Beenkeragh (1,010Â m), while the ridge westward leads to the third-highest peak, Caher (1,001Â m). Carrauntoohil overlooks three bowl-shaped valleys, each with its own lakes. To the east is Hag's Glen or Coomcallee (Com CaillÃ­, "hollow of the Cailleach"), to the west is Coomloughra (Com Luachra, "hollow of the rushes") and to the south is Curragh More (Currach MÃ³r, "great marsh").

Carrauntoohil is classed as a Furth by the Scottish Mountaineering Club, i.e. a three thousander footer furth or "outside of" Scotland, which is why it is sometimes referred to as one of the Irish Munros.

The mountain's name has a number of spellings and theories of origin. 'Carrauntoohil' is the most common spelling of the name, and is the one used by Ordnance Survey Ireland. Other spellings include 'Carrantoohil', 'Carrantouhil', 'Carrauntouhil' and 'Carrantuohill'. These are anglicizations of an Irish placename, but its origins and meaning are not clear. "Unlike some lesser peaks, such as Mangerton or Croagh Patrick, it is not mentioned in any surviving early Irish texts". The official Irish name is CorrÃ¡n Tuathail. This has been interpreted as "inverted sickle" or "Tuathal's sickle", Tuathal being a male firstname. However, one of the earliest mentions of the mountain, by Isaac Weld in 1812, refers to it as 'Gheraun-Tuel'. This suggests that the first element was gÃ©arÃ¡n ("fang")â€"which is found in the names of other Kerry mountainsâ€"and that an earlier name may have been GÃ©arÃ¡n Tuathail ("Tuathal's fang").

The mountain is most often climbed from the north-east, along the Hag's Glen and up the steep Devil's Ladder to the col between Carrauntoohil and Cnoc na Toinne, and then north-west to the summit. The route has become more dangerous in recent years due to loose stones and crowding. No special equipment is needed to climb the mountain, but caution is advised. Alternatively, one can walk the two other 1,000Â m peaks in a "horseshoe" trip, starting from the west. The traverse from highest point to the second highest involves a light scramble.