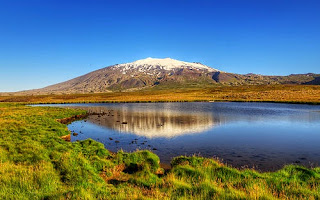 SnÃ¦fellsjÃ¶kull (Icelandic pronunciation:Â [ËˆstnÌ¥aiËfÉ›lsËŒjÅ"ËkÊtlÌ¥], snow-fell glacier) is a 700,000-year-old stratovolcano with a glacier covering its summit in western Iceland. The name of the mountain is actually SnÃ¦fell, but it is normally called "SnÃ¦fellsjÃ¶kull" to distinguish it from two other mountains with this name. It is situated on the most western part of the SnÃ¦fellsnes peninsula in Iceland. Sometimes it may be seen from the city of ReykjavÃ­k over the bay of FaxaflÃ³i, at a distance of 120Â km.

The mountain is one of the most famous sites of Iceland, primarily due to the novel Journey to the Center of the Earth (1864) by Jules Verne, in which the protagonists find the entrance to a passage leading to the center of the earth on SnÃ¦fellsjÃ¶kull.

The mountain is included in the SnÃ¦fellsjÃ¶kull National Park (Icelandic:

In August 2012 the summit was ice-free for the first time in recorded history.

The stratovolcano, which is the only large central volcano in its part of Iceland, has many pyroclastic cones on its flanks. Upper-flank craters produced intermediate to felsic materials, while lower-flank craters produced basaltic lava flows. Several holocene eruptions have originated from the summit crater and have produced felsic material. The latest eruption took place 200Â AD Â± 150Â years, and erupted approximately 0.11 cubic kilometres (0.026Â cuÂ mi) worth of volcanic material. The eruption was explosive and originated from the summit crater, and may have produced lava flows.

SnÃ¦fellsjÃ¶kull National Park is Icelandâ€™s only National Park to extend to the seashore. The park covers an area of 170Â kmÂ² (65Â sq. miles). The Parkâ€™s southern boundary reaches to HÃ¡ahraun in the region of DagverÃ°arÃ¡ while the northern part reaches to GufuskÃ¡lar. The coast is varied and alive with birdlife during the breeding season. The coastal plain is mostly covered by lava that flowed from the glacier or nearby craters. The lava is covered with moss but sheltered hollows can be found in many places, filled with a sizable variety of thriving, verdant plants. SnÃ¦fellsjÃ¶kull has trails of lava and signs of volcanic activity clearly visible on its flanks. On its north side the Eysteinsdalur valley cuts a path up from the plain encircled by alluring steep mountains.

The geology of SnÃ¦fellsnes Peninsula is diverse with formations from almost every era of Icelandâ€™s past. The more prominent formations in and around the National Park mainly date from geologically â€œmodernâ€ times back to the last ice age. The hills to the north of the glacier, around BÃ¡rÃ°arkista, are of volcanic palagonite tuff, formed during eruptions under the glacier or below the surface of the sea. SvalÃ¾Ãºfa is most likely the eastern section of a crater that erupted under the sea, while LÃ³ndrangar is a volcanic plug.

Lava is prominent on the landscape of this National Park with two types present â€" rough, jagged lava (Ê»AÊ»Ä) and smooth, ropy lava (PÄhoehoe). Most of the lava emanated from the glacier, from the summit crater or from subsidiary craters on the flanks of the mountain. These lava formations are varied and fascinating, and there is a wealth of caves in the area. Visitors are advised not to enter caves unless accompanied by an experienced guide. Smaller volcanoes â€" PurkhÃ³lar, HÃ³lahÃ³lar, SaxhÃ³lar and Ã–ndverÃ°arneshÃ³lar â€" are in the Parkâ€™s lowlands, surrounded by lava.

The adventurous BÃ¡rÃ°ar saga SnÃ¦fellsÃ¡ss is the best known of the Icelandic Sagas that take place in this area. There are archaeological remains from the period of Icelandâ€™s settlement around 1100Â years ago â€" examples of which are the Forni-SaxhÃ³ll farm, BerutÃ³ftir and ÃrskubÃºÃ°ir. Near GufuskÃ¡lar there are a large number of dome-like structures of unknown origin, thought to be between 500 and 700Â years old. They are probably the oldest known relics of the fishing industry in Scandinavia. A few people believe that these structures served instead as places of prayer or meditation for Irish monks who may have once lived in the area.

Fishing flourished in the 13th century and the human population grew in the areas around the glacier. A church had been built on IngjaldshÃ³ll hill before 1200Â AD. The size of the church bears witness to the sizeable population of nearby towns and villages, at least during fishing season. Rich fishing grounds were nearby and the fishing stations were constructed where there was good access to the open sea. DritvÃ­k is one of the best-known examples. It was one of the largest fishing stations in Iceland for a time, with 40â€"60 boats and 200â€"600Â people employed there. Fishing declined on SnÃ¦fellsnes Peninsula during the 19th century because of changes in fishing techniques.

Villages close to the National Park include Hellissandur, Rif and Ã"lafsvÃ­k. They were all fishing and commercial centres. Today, they are still flourishing fishing ports with lively communities.

In summer, the saddle near the summit can be reached easily by walking, although the glacier's crevasses must be avoided. Several tour companies run regular guided walks during the season. To reach the true summit requires technical ice climbing.