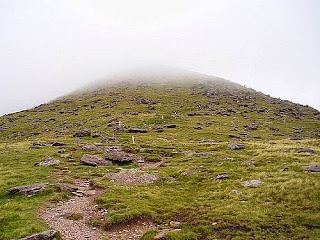 Mount Brandon or Brandon Mountain (Irish: Cnoc BrÃ©anainn, meaning "Brendan's hill") is a 952Â m (3123Â ft) mountain on the Dingle Peninsula in County Kerry, Ireland. It is the highest peak of the unnamed central mountain range of the Dingle Peninsula and the ninth highest peak on the island. It is also the highest Irish peak outside the Macgillycuddy's Reeks. It is classed as a Furth by the Scottish Mountaineering Club. Mount Brandon is named after Saint Brendan and is the end of a Christian pilgrimage trail known as CosÃ¡n na Naomh. The small village of Brandon lies at the foot of the mountain, on the north side.

The mountain takes its name from Saint Brendan or BrÃ©anainn, who is said to have been born in what is now County Kerry. Brendan is chiefly known for his legendary voyage to the "Isle of the Blessed", also called Saint Brendan's Island. The tale of Brendan's voyage may be a Christianization of the earlier Voyage of Bran.

A medieval work about Brendan's life calls the mountain Sliabh nDaidche (in the Irish version Beatha BhrÃ©anainn) or Mons Aitche (in the Latin version Vita Brendani), and Alan Mac an Bhaird has translated this as "mountain of Faithche". However, some believe the name refers to Slieve Aughty rather than Mount Brandon.

Due to its link with Saint Brendan, the mountain is popular with Irish Catholic pilgrims. The path to the peak is marked by small white crosses and the peak itself is topped by a large metal cross. The pilgrimage route called CosÃ¡n na Naomh ("The Saints Road") begins at Cill Mhic an Domhnaigh (Kilvickadowning) at the southern end of the Dingle peninsula and ends at SÃ¡ipÃ©ilÃ­n BrÃ©anainn ("Brendan's Oratory") on the mountain's peak. SÃ¡ipÃ©ilÃ­n BrÃ©anainn is the remains of a small stone building that was believed to have been used by Saint Brendan. It is likely that the pilgrimage originated in pre-Christian times and was originally a Lughnasadh ritual. The mountain's importance may be due to the fact that, being so far west and so high, it is the last place where the sun can be seen before it sets.

In 1997, the Heritage Council set up the Pilgrim Paths project to develop walking routes along medieval pilgrimage paths. One of the routes chosen for development was CosÃ¡n na Naomh and an 18-kilometre (11-mile) long waymarked trail has been constructed between Ventry Strand and the grotto at Ballybrack at the foot of Mount Brandon. The trail has been developed to the standard required by the Irish Sports Council for National Waymarked Trails in Ireland. For safety reasons, it was decided not to mark the trail to the very end of the traditional route at the summit of Brandon but to finish at Ballybrack. The starting point of the trail at Ventry is one of the places pilgrims arriving by boat would have come ashore. The trail passes a number of important ecclesiastical heritage sites including Gallarus Oratory and Kilmalkedar monastic site. The route has the greatest concentration of stones marked with the "cross of arcs", one of the main symbols of pilgrimage in Ireland.

Mount Brandon owes its craggy shape to the work of local glaciers during the ice age, which gouged out a series of corries on the eastern flank of the mountain. The summit of Mount Brandon is rounded and smooth because it was a nunatuk, and presents a stark contrast to the conical top of Barr an GhÃ©arÃ¡in, which is almost alpine in appearance. The western slope of Mount Brandon presents a huge contrast from its eastern side, as it largely escaped the gouging effect of the glaciers, with the result that it presents an almost unbroken grassy slope.

The glen on the mountain's east side is a series of rock steps, each of which includes a small Paternoster lake. There at least ten of these lakes, which grow in size as one descends the mountain. From highest to lowest (and smallest to biggest) they are the Locha Chom an Chnoic (Coumaknock Loughs), Loch na Lice (Lough Nalacken) and Loch Cruite (Lough Cruttia).