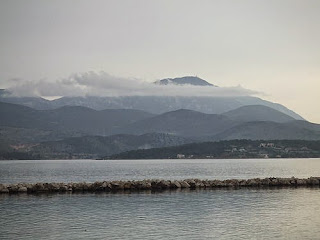 Most of the mountain range is designated as a park area and is covered with Greek fir (Abies Cephalonica) and black pine (Pinus nigra). Pine forests are found between the elevations of 700 to 1200 m.

On clear days, the view includes the NW Peloponnese and Aetolia along with the islands of Zakynthos, Lefkada, and Ithaca.

No ski resorts are found on this mountain range, but there are beautiful caves to be seen in the north. A highway passes over the mountain range connecting traffic from southwestern to the eastern part of the island is one of the few roads going into the mountain range. Approximately 3,000 to 4,000 people live on the slopes of Ainos. Multiple television and cell phone relay towers occupy the summit.

The easiest way to get to the summit is to drive along the Mt Ainos road from the North West to the transmitter station. Leave your car here and then continue along the dirt track on foot for about 10 minutes until you reach some steps to the right and a sign post. Go up these steps for another 10 minutes to reach the summit. A concrete post at the summit has a metal container strapped to it, this contains a visitor book.

For a more strenuous walk, roughly equivalent to climbing up Ben Nevis, the route described below is well maintained and signposted. Start at Digaleto, on the road from Sami to Poros. Drive, or walk, along the road heading West, signposted to Ainos/Einos. The official walk starts at a quarry, about 1km out of the village. Walk through the quarry and follow the signs containing a white square on a yellow background (some of these signs are a little rusty and appear to be red). All the major junctions have a map and most have shaded rest areas. Much of the walk is above the tree line and can be cool even in the summer. The climb is 1096 metres and the length is 6.5km.