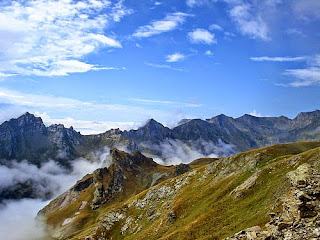 Mount Korab (Albanian: Maja e Korabit or Mali i Korabit; Macedonian: Ð"Ð¾Ð»ÐµÐ¼ ÐšÐ¾Ñ€Ð°Ð±, Golem Korab) is the highest mountain of Albania and the Republic of Macedonia, its peak forming a frontier between the two countries. The peak lies adjacent to the Å ar Mountains. In 2011, Albania proclaimed its section as part of the Korab-Koritnik Natural Park.

Mount Korab is also pictured in the coat of arms of the Republic of Macedonia. The Korab mountain range stretches over 40 kilometers in a north-south direction between the lower section of the Black Drin and its tributary Radika. It is located around the border triangle of Albania, Macedonia and Kosovo, southwest of the mountain Å ar Mountains. The Korab is a very rugged mountain massif and consists mainly of shale and limestone of the Paleozoic with block structures, as well as severely damaged gypsum rocks of Permo Triassic . On the west side, the mountain falls steeply over rock walls. The north side consists of craggy rocks. A kind of double peak, that of Korab II 2,756m, which almost reaches the same height, is about 150 meters northwest of the Korab peak within Albanian territory. On the same ridge are two other peaks rising over 2700m, Shulani i Radomires and Korab III. The southeast, stretching from a few rock bands broken meadows to the summit is accessed by very simply, and occasionally by shepherds with their flocks of sheep.

In addition to the Korab peak there are several other, almost equally high elevations. North of the twin peaks are numerous other nameless, almost equally high rock towers. The peak located about two kilometers southwest, Korab-gate (Maja e Portat Korabit / Korapska Mala vrata) reaches 2727m. A few hundred yards south is another peak Maja e MoravÃ«s, which is 2718 meters, with only a little lower.

The peaks are occasionally ruptured by radial tectonics in the shape of blocks that end in the Radika Valley on the Republic of Macedonian side. These blocks occasionally have steep slopes that reach up to 500Â m (1,640Â ft). In its highest part, above 2,000Â m (6,562Â ft), the climate is alpine and includes some alpine flora elements. The mountain is home to spectacular Korab Falls in the upper valley of the Dlaboka River. During spring time, the waterfall reaches a height of over 130 meters, which makes it the highest in Macedonia. The state border intersects the higher peak, Great Korab.

The mountain has a number of sub-peaks that are higher than 2000 metres. These include:

The two main passes in the Korab ridge are:

There are no formal restrictions on climbing the mountain from the Albanian side. The area is now safer and more stable than it has been in recent times. It is possible to drive as far as the local village of Radomira, but the local infrastructure is generally not good. A four wheel drive vehicle with high clearance may be required. There are no accurate and up to date maps, local signposting is poor, and hikers may have to overcome the additional problem of aggressive dogs.

An international expedition to climb Mount Korab is organized each September by the mountain club PSD "Korab" in Skopje.