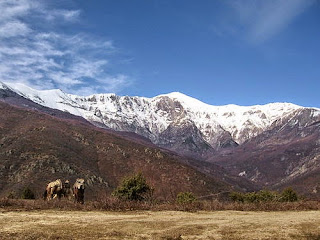 The relief is criss-crossed by numerous clear and fast mountain rivers. Large areas are covered with beech, oak, and conifer forests. There are also obvious traces of the primeval glaciation from the diluvial period. A number of institutions have been recommending the promotion of this area (and the one of the Å ar Mountains) into a national park.

This mountain range can be easily approached from the capital Skopje, or from the town of Veles and many villages in the area.

On clear days, from the peak Solunska Glava, one could even see the city of Thessaloniki, in Greece.