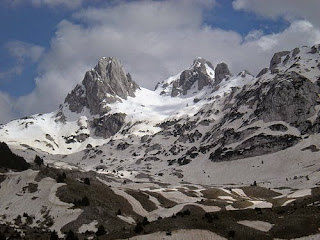 Prenj is a mountain range in the Dinaric Alps of southern Bosnia and Herzegovina, located in eastern Herzegovina near Mostar, Jablanica and Konjic. The highest peak is the Zelena glava at 2,115Â m (6,939Â ft), and there are several other peaks of similar height.

The name -Prenj- is derived from Perun, supreme deity of Slavic mythology. Geologically, the Prenj range is part of the Dinaric Alps and formed largely of secondary and tertiary sedimentary rock, mostly Limestone and Dolomite with notable characteristics of a Karst landform. Due to subterranean drainage, Prenj is relatively dry with few water sources, just a few tiny lakes and some smaller streams that source from these mountains: the BaÅ¡cica, and the Bijela, tributaries of the Neretva. Notable peaks are Zelena Glava (2115 m.), OtiÅ¡ (2097 m.), Lupoglav (1950 m.), HeraÄ (2046 m.), Velika Kapa (2007 m.) and Osobac (2030 m.)

The Prenj mountains were part of the front-line during the 1992-95 war in Bosnia and heavy combat took place in the mountains surrounding the eastern Bijela valley and the slopes above Konjic. Nowadays, Prenj falls almost entirely within the territory of the Federation of Bosnia and Herzegovina. Contamination with land mines and unexploded ordnance is a serious threat, especially east of a line that can be drawn from ÄŒelebiÄ‡i to the summit of Zelena Glava and then to the village of Ravni. Former combat positions can be found as high up as the shoulders of OtiÅ¡ at around 2000 meters. Nevertheless, Prenj is a very attractive destination for climbers and hikers. The peaks bear typical dolomitic features with vertical rock faces, soaring over green alpine valleys and dense mixed forests. Some mountain huts have re-opened (Bijele Vode, Hrasnica Pl. Kuca) and marked itineraries to the main peaks have been re-established.