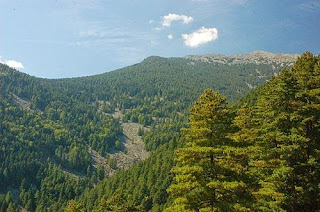 Baba Mountain (Macedonian: Ð'Ð°Ð±Ð° ÐŸÐ»Ð°Ð½Ð¸Ð½Ð°/Baba Planina, Greek: Î'Î±ÏÎ½Î¿ÏÏ‚/Varnous), or also known by the name of its highest peak, Pelister or Peristeri (meaning pigeon in Greek), is a mountain massif between the Republic of Macedonia and Greece. The Pelister (or Peristeri) peak (2601 metres, or 8533 feet) overlooks the city of Bitola. Baba Mountain is the third highest mountain in the Republic of Macedonia and the fifteenth highest mountain in Greece. Other peaks besides Pelister are Dva Groba (2514 metres), Veternica (2420 metres), Muza (2350 metres), Rzana (2334 meters), Shiroka (2218 metres), Kozji Kamen (2199 metres), Griva (2198 metres) and Golema Chuka (2188 metres) in the Republic of Macedonia, and Belavoda (2.179 meters), Kirko (2.155 meters) and Kotsypha (2.065 meters) in Greece. The Baba massif splits up the rivers in the region, so that they either flow towards the Adriatic or the Aegean sea.

Pelister is the oldest and second largest national park in Republic of Macedonia after Mavrovo. It is one of the leading tourist areas in the country, since it is a well-known ski resort, along with Ohrid, Prespa, Dojran, Popova Å apka, and KruÅ¡evo.

Pelister provides views of the Pelagonia valley, Lake Prespa, NidÅ¾e, GaliÄica, Jakupica, and the city of Bitola. Pelister is also one of the most southern mountains in the Balkans that has an alpine character.

Pelister is also known for its two mountain lakes, which are called Pelister's Eyes. The Big lake is 2,218 metres above the sea level while the Small lake is 2,180 metres high. Here are the sources of many rivers. The climate in Pelister National Park is diverse.

On the peaks, there is snow even in July, and in some places the new snow meets the old from previous years.

On Pelister mountain, there is a TV transmitter using an additionally guyed lattice steel mast as antenna tower.