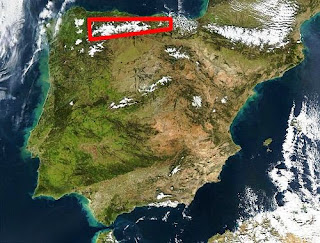 The Cantabrian Mountains or Cantabrian Range (Spanish: Cordillera CantÃ¡brica) are one of the main systems of mountain ranges in Spain. They stretch for over 300Â km (180Â miles) across northern Spain, from the western limit of the Pyrenees to the Galician Massif in Galicia, along the coast of the Cantabrian Sea. Their easternmost end meets the Sistema IbÃ©rico.

The Cantabrian Mountains offer a wide range of trails for hiking, as well as many challenging climbing routes. Skiing is possible in the ski resorts of Alto Campoo, Valgrande-Pajares and Manzaneda.

The Cantabrian Mountains stretch east-west, nearly parallel to the sea, as far as the pass of Leitariegos, also extending south between LeÃ³n and Galicia. The range's western boundary is marked by the valley of the river MiÃ±o (Portuguese: Minho), by the lower Sil, which flows into the MiÃ±o, and by the Cabrera River, a small tributary of the Sil.

As a whole, the Cantabrian Mountains are remarkable for their intricate ramifications, but almost everywhere, and especially in the east, it is possible to distinguish two principal ranges, from which the lesser ridges and mountain masses radiate. One range, or series of ranges, closely follows the outline of the coast; the other, which is loftier, forms the northern limit of the great tableland of Castile and LeÃ³n, and is sometimes regarded as a continuation of the Pyrenees. In some parts the coastal range rises sheer above the sea, and everywhere has so abrupt a declivity that the streams which flow seaward are all short and swift.

The descent from the southern range to the high plateaux of Castile is more gradual, and several large rivers, notably the Ebro, rise here and flow to the south or west. The breadth of the Cantabrian chain, with all its ramifications, increases from about 60Â mi (97 km); in the east to about 115Â mi (185 km) in the west. Many peaks are over 6000Â ft high, but the greatest altitudes are attained in the central ridges on the borders of LeÃ³n, Asturias, Palencia and Cantabria. Here are the highest peak Torre de Cerredo (8,688Â ft), PeÃ±a Vieja (8,579Â ft), PeÃ±a Prieta (8,304Â ft) and EspigÃ¼ete (7,898Â ft); an unnamed summit in the Picos de Europa, to which range the PeÃ±a Vieja also belongs, rises on the right bank of the Sella to a height of 8,045Â ft; further west the peaks of Manpodres, PeÃ±a UbiÃ±a, PeÃ±a Rubia and CuiÃ±a all exceed 7,000Â ft. A conspicuous feature of the chain, as of the adjacent tableland, is the number of its parameras, isolated plateaus shut in by lofty mountains or even by precipitous walls of rock.

The Cantabrian Mountains make a sharp divide between "Green Spain" to the north, and the dry central plateau. The north facing slopes receive heavy cyclonic rainfall from the Bay of Biscay, whereas the southern slopes are in rain shadow.

The Cantabrian Range has three very distinct sections from west to east:

The Asturian Massif and its foothills. Geologically it is an eastern prolongation of the Galician Massif with Paleozoic folds. It is cut by deep east-west oriented canyons such as the Cares River valley. Highest point Torre de Cerredo 2,648 m.

The main mountains of this zone are the massive Picos de Europa. They are composed of Carboniferous limestone and marl. The Paramo de Masa and La Lora grasslands are located in the south crossed by the RudrÃ³n Valley.

The Basque Mountains at the eastern end of the system, with very eroded Mesozoic folds and ranges of moderate height:

The Cantabrian Mountains are home to an important variety of plant life, as well as the Cantabrian brown bear (Ursus arctos pyrenaicus), catalogued as being in danger of extinction, which extends from LÃ©on to areas in Palencia and Cantabria, and the Cantabrian Capercaillie (T. urogallus cantabricus).

Other animals associated with the range include the Iberian Wolf (Canis lupus signatus) and the rebeco, or Cantabrian chamois (Rupicapra pyrenaica parva).

The Cantabrian mountain range includes several protected areas such as the Picos de Europa National Park, which is one of several Cantabrian parks included in UNESCO's World Network of Biosphere Reserves. Some of the sites are included in the European Union's Natura 2000 network and Special Protection Areas for the Conservation of Wild Birds.