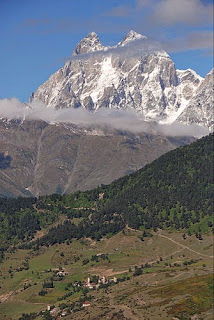 Ushba (Georgian: áƒ£áƒ¨áƒ'áƒ) is one of the most notable peaks of the Caucasus Mountains. It is located in the Svaneti region of Georgia, just south of the border with the Kabardino-Balkaria region of Russia. Although it does not rank in the 10 highest peaks of the range, Ushba is known as the "Matterhorn of the Caucasus" for its picturesque, spire-shaped double summit. Due to its steep profile and unstable weather, Ushba is considered by many climbers as the most difficult ascent in the Caucasus.

Ushba's south summit is slightly higher than its north summit, which has an elevation of 4,690Â m (15,387Â ft). The north summit was first climbed in 1888 by John Garford Cokklin and Ulrich Almer, while the south summit saw its first ascent in 1903 by a German-Swiss-Austrian expedition led by B. Rickmer-Rickmers.

Ushba's north summit is more accessible than the south summit: the standard route, the Northeast Ridge, ascends from the Russian side of the range to a high plateau and thence to the summit. (Hence a summit ascent on this route technically involves crossing the border.) The route is graded French AD+ or Russian 4a. Routes on the south summit, from the Georgian side, include two routes graded French ED.

In August 2012, thunderstorms made the ascent of Ushba treacherous. One climber died and another, Andranik Miribyan, was stuck near the summit for four days after becoming trapped on a ledge by heavy snowfall. Due to high winds, rescuers were unable to reach him by helicopter and Andranik made the decision to descend the mountain, despite having no ice axe after his broke while clearing snow.