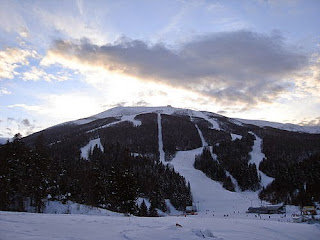 BjelaÅ¡nica (pronouncedÂ [bjÄ›laËÊƒnitÍ¡sa]) is a mountain in central Bosnia and Herzegovina. It is found directly to the southwest of Sarajevo, bordering Mt. Igman. BjelaÅ¡nica's tallest peak, by which the whole mountain group got its name, rises to an elevation of 2067 meters (6782Â feet). Other notable peaks are Krvavac (2061 m), Mali Vlahinja (2055 m), and Hranisava (1964 m). The BjelaÅ¡nica range is bordered by the Rakitnica in the south, the Neretva in the west, Mt Igman in the north-east and Mt Ivan in the north-west. Only at 20 minutes distance of Sarajevo, it is a popular tourist attraction for hiking and skiing.

BjelaÅ¡nica has been, in certain areas, the site of extensive combat during the 1992-'95 Siege of Sarajevo and particular areas pose a high mine risk. There are numerous trails set up and maintained by local mountain clubs that lead to the bald peaks higher up. The mountain is also popular with mountain bikers and has become recently a frequent base for paragliders.

The mountain's name stems from the root bijel, which means "white".

Geologically, BjelaÅ¡nica is part of the Dinaric Alps and formed largely of secondary and tertiary sedimentary rock, mostly Limestone and Dolomite.

The white snow cupola of Bjelasnica is a familiar sight from the higher points in Sarajevo in the period from mid October until early June. BjelaÅ¡nica's base is largely forested - mixed forest, mostly beech - however there are no trees above the 1500 meter (4921') tree line.

BjelaÅ¡nica summit is easily recognized from the distance by the structures that have been erected on top of it. After the Austro-Hungarian Empire occupied Bosnia following the Congress of Berlin in 1878 the Austrians installed almost immediately the first meteorological station on the summit in 1878, creating the first meteorological station in the whole area of the Balkans. This structure was replaced in 1894 by an - at that time - very advanced meteorological observatory with an all-year around manning. The observatory is still there, has been repaired of the damage sustained during the last war, and still functions as an important chain-link in the meteorological survey of the Balkans. The communications Centre with its landmark tower that used to stand next to the observatory was destroyed in 1993. The sad remains of the broken tower were removed in 2006.

During the 1984 Winter Olympics, BjelaÅ¡nica hosted the men's alpine skiing events, where brash Bill Johnson (USA) won the downhill after boldly predicting victory, overtaking Swiss ski legend Peter MÃ¼ller who took silver. The American twins Phil and Steve Mahre took gold and silver in the slalom at BjelaÅ¡nica for the US as well. Switzerland's Max Julen surprisingly took the gold in the Giant Slalom, while the silver went to the Yugoslav favorite Jure Franko. Major investment was done by the Yugoslav authorities in order to accommodate the Winter Olympics. The Babin Dol area was developed for the necessary construction and a long main ski lift was built from Babin Dol up to the summit of the BjelaÅ¡nica summit. In preparation of the Games, a road was constructed across the Igman plateau connecting Sarajevo through HadÅ¾iÄ‡i to the Malo Polje, Veliko Polje and Babin Dol venues. The Babin Dol area has several structures dating from that time, including the renown MarÅ¡al (then: Famos) Hotel and most of the skiing facilities in the area. FIS World Cup events took place on 18 January 1983 and 21â€"22 March 1987. In 1983 it was only the downhill (winner: Gerhard Pfaffenbichler, before Steve Podborski and Franz Klammer) that was done. In 1987 contests were done in Men's Slalom (winner: Grega Benedik) and Giant Slalom, Men's (winner: Marc Girardelli) and Women's (tied victory: Maria Walliser and Vreni Schneider) Other FIS events have taken place and are still taking place at BjelaÅ¡nica.

But BjelaÅ¡nica became in the course of the Bosnian War an area of major strategic importance as part of the 1992-1995 Siege of Sarajevo. The territory covered by the Bjelasnica range and the Igman plateau between Konjic and the United Nations-controlled Sarajevo Airport was from the outset of the conflict controlled by the ARBiH. By mid-1993, the central plateau of Igman came under increased Serb military pressure when the suspicion became stronger that the area had become a major logistical artery of the besieged city as a result of the construction of the Sarajevo tunnel.

A major BSA offensive started July 1993 that led to the fall of Trnovo and on 4 August 1993 Serb forces captured the BjelaÅ¡nica summit and part of the Igman supply road. The BSA advance was stopped under threat of NATO airstrikes. After tense negotiations the BSA retreated from the BjelaÅ¡nica summit, but not without blowing up the communications tower first. French United Nations Protection Force (UNPROFOR) units were stationed on BjelaÅ¡nica and the Igman area was declared a Demilitarized Zone (DMZ) by the UN.

The situation around the frontlines in nearby Treskavica and around Babin Dol remained explosive with violent exchanges of hostilities between BSA and ARBiH units. The villages on the southern slopes of BjelaÅ¡nica, like Umoljani and Lukavac were not in the frontline, but sustained heavy damage from shelling. Discussion about real or alleged use by ARBiH forces of the Igman DMZ was an issue of constant contention between UNPROFOR Commander General Rose, ARBiH General DeliÄ‡ and BSA Commander MladiÄ‡.

By mid-1995 the military situation became very tense again, and in August 1995 the BSA launched another offensive, forcing UNPROFOR from the Bjelasnica ridge and advancing through Babin Dol towards Veliko Polje. However, after the second Markale shelling, on August, 30, NATO started Operation Deliberate Force, in which NATO aircraft engaged BSA Command & Control facilities and other targets. Also the BSA-held radar station on Vlahinja ridge was completely destroyed during these air strikes that lasted until 14 September 1995, when the air strikes were suspended to allow the implementation of the withdrawal of BSA heavy weapons from the Sarajevo exclusion zone, effectively ending the Siege of Sarajevo.

Extensive de-mining activities have taken place around recreational areas and especially around the existing ski runs, which can be considered safe by all means. The largest part of the BjelaÅ¡nica range remained largely spared from warfare and the mine risk is therefore minimal within the area west of the BjelaÅ¡nica summit and east of the Hranisava mountain.

The BjelaÅ¡nica Olympic Mountain Ski Centre and its facilities are all located on the eastern slope of BjelaÅ¡nica main summit. There are 6 lifts, with one modern three-seat carrier lift departing from Babin Dol, three anchor lifts and two remaining single saucer lifts. Next to the original 3100 meter Olympic Downhill run and the Giant Slalom run there are four more pistes varying in length between 3200 and 550 meters and covering all difficulty levels between bleu-red-black. A lot of investment has been done to develop the Ski Centre and the Babin Dol area since the era directly following the Dayton Agreement, with another peak during the last couple of years. New hotels, apartment complexes and restaurants have turned this area into a modern ski resort.

The BjelaÅ¡nica range consists of basically three ridges, the Vlahinja ridge, the Strug ridge and a more southern ridge parallel to the Rakitnica and separated from the other ridges by a wide valley called Dugo Polje. A number of popular hikes exist in these mountains. One trail approaches the BjelaÅ¡nica main summit (2067 m.) from the north and is called Josipova Staza after its most famous hiker: Josip Broz Tito. From the main summit a ridge walk leads north-east towards the summit of Mala Vlahinja (2055 m.). The last summit of this ridge in the west is called Hranisava (1964 m.) and can be better ascended to by a trail starting in the hamlet of Lokve, between HadÅ¾iÄ‡i and PazariÄ‡. This offers a beautiful hike towards a fantastic view from this most western summit of the BjelaÅ¡nica range. Another beautiful hike departs from Dugo Polje and leads via a difficultly retrieved trail through thick shrubs of Pinus Mugo the summit of Krvavac (2061 m.). One of the most popular hikes leads parallel to the Rakitnica Canyon, departing from Umoljani and ending at Lukomir, known to be the last all-year-through inhabited semi-nomadic settlement at this altitude in the Balkans. There is quite a number of well equipped mountain huts to be found within this mountain group. Stanari P.D. (1540 m.) is an excellent base for hikes in the central-western part of the mountain range. There are other mountain huts at Sitnik, Umoljani and Lukomir that might require prior reservation.]