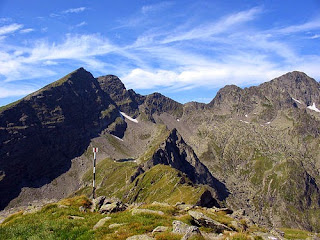 The Southern Carpathians (Romanian: CarpaÈ›ii Meridionali, Serbian: ÐˆÑƒÐ¶Ð½Ð¸ ÐšÐ°Ñ€Ð¿Ð°Ñ‚Ð¸/JuÅ¾ni Karpati, Hungarian: DÃ©li-KÃ¡rpÃ¡tok) are a group of mountain ranges that divide central and southern Romania, on one side, and Serbia, on the other. They cover the part of the Carpathian Mountains located between the Prahova River in the east and the TimiÈ™ and Cerna Rivers in the west. To the south they are bounded by the Balkan mountain range in Serbia. The Southern Carpathian are the second highest group of mountains in the Carpathian Mountain range (after Tatra), reaching heights of over 2,500 meters. Although considerably smaller than the Alps, they are classified as having an alpine landscape. Their high mountain character, combined with great accessibility, makes them popular with tourists and scientists.

The highest peaks are:

Despite the heights, some of the most accessible passages in the Carpathians in Romania are along the rivers, which cross the mountain range (the Olt River) or form wide valleys (along the Prahova River Valley or along the Jiu River Valley).

The South Carpathians represent an intricate pile of tectonic nappes, overthrusted from west eastwards during the Austrian (Middle Cretaceous) and Laramian paroxysmal phases, corresponding to various plate fragments. The napes are (from west eastwards): the Supragetic, Getic, Severin and Danubian Units. The Getic Nappe was identified by Murgoci (1905), while the general understanding over the Alpine structure of the South Carpathians was later refined by Codarcea (1940), Codarcea et al. (1961), NÄƒstÄƒseanu et al. (1981), SÄƒndulescu (1984), SÄƒndulescu and Dimitrescu (2004), and Mutihac (1990). The first to apply the global tectonics concepts for the Romanian Carpathians were RÄƒdulescu and SÄƒndulescu (1973).

The Supragetic, Getic Nappes as well as the Danubian Units represent units with both a metamorphic basement and a sedimentary cover, while the Severin Nappe includes only a sedimentary sequence. The Getic Nappe and the Danubian Units sediments include a Palaeozoic sequence (Upper Carboniferous, Lower Permian) and a Mesozoic sequence (Lowermost Jurassic - Middle Cretaceous). The Supragetic Nappe comprises mainly metamorphosed rocks (gneisses, micashists), while the Severin Nappe includes only Upper Jurassic - Lower Cretaceous sediments. From east to west, four mountain groups can be identified, separated by different river valleys.