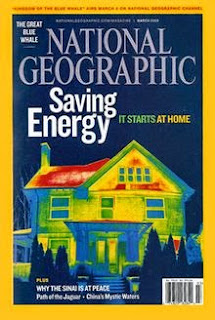 National Geographic, formerly The National Geographic Magazine, is the official magazine of the National Geographic Society. It has been published continuously since its first issue in 1888, nine months after the Society itself was founded. It primarily contains articles about geography, history, and world culture. The magazine is known for its thick square-bound glossy format with a yellow rectangular border and its extensive use of dramatic photographs.

The magazine is published monthly, and additional map supplements are also included with subscriptions. It is available in a traditional printed edition and through an interactive online edition. On occasion, special editions of the magazine are issued.

The current Editor-in-Chief of the National Geographic Magazine is Susan Goldberg.

Terry B. Adamson, Executive Vice President of the Society and the Society's chief legal officer, has overall responsibility for the Society's international publications, including the magazine. He also reports to Knell.

The first issue of National Geographic Magazine was published in October 1888, nine months after the Society was founded. Starting with its January 1905 publication of several full-page pictures of Tibet in 1900â€"1901, the magazine changed from being a text-oriented publication closer to a scientific journal to featuring extensive pictorial content, and became well known for this style. Among its more recent issues, the June 1985 cover portrait of 13-year-old Afghan girl Sharbat Gula became one of the magazine's most recognizable images.

The magazine celebrated its 125th anniversary in October 2013.

Editors-in-chief of the National Geographic Magazine

Editor and president of the National Geographic Society (1920-1967)

During the Cold War, the magazine committed itself to presenting a balanced view of the physical and human geography of nations beyond the Iron Curtain. The magazine printed articles on Berlin, de-occupied Austria, the Soviet Union, and Communist China that deliberately downplayed politics to focus on culture. In its coverage of the Space Race, National Geographic focused on the scientific achievement while largely avoiding reference to the race's connection to nuclear arms buildup. There were also many articles in the 1930s, 40s and 50s about the individual states and their resources, along with supplement maps of each state. Many of these articles were written by longtime staff such as Frederick Simpich. There were also articles about biology and science topics.

In later years articles became outspoken on issues such as environmental issues, deforestation, chemical pollution, global warming, and endangered species. Series of articles were included focusing on the history and varied uses of specific products such as a single metal, gem, food crop, or agricultural product, or an archaeological discovery. Occasionally an entire month's issue would be devoted to a single country, past civilization, a natural resource whose future is endangered, or other theme. In recent decades, the National Geographic Society has unveiled other magazines with different focuses. Whereas in the past, the magazine featured lengthy expositions, recent issues have shorter articles.

In addition to being well known for articles about scenery, history, and the most distant corners of the world, the magazine has been recognized for its book-like quality and its standard of photography. This standard makes it the home to some of the highest-quality photojournalism in the world. The magazine began to feature color photography in the early 20th century, when this technology was still rare. During the 1930s, Luis Marden (1913â€"2003), a writer and photographer for National Geographic, convinced the magazine to allow its photographers to use small 35Â mm cameras loaded with Kodachrome film over bulkier cameras with tripods and glass plates. In 1959, the magazine started publishing small photographs on its covers, later becoming larger photographs. National Geographic photography has quickly shifted to digital photography for both its magazine on paper and its website. In subsequent years, the magazine cover, while keeping its yellow border, shed its oak leaf trim and bare table of contents, for a large photograph taken from one of the month's articles inside. Issues of National Geographic are often kept by subscribers for years and re-sold at thrift stores as collectible back-issues. In 2006, National Geographic began an international photography competition with over eighteen countries participating.

In conservative Muslim countries like Iran and Malaysia, photographs featuring topless or scantily clad members of primitive tribal societies are often blacked out; buyers and subscribers often complain that this practice decreases the artistic value of the photographs for which National Geographic is world-renowned.

Supplementing the articles, the magazine sometimes provides maps of the regions visited.

National Geographic Maps (originally the Cartographic Division) became a division of the National Geographic Society in 1915. The first supplement map, which appeared in the May 1918 issue of the magazine, titled The Western Theatre of War, served as a reference for overseas military personnel and soldiers' families alike. On some occasions, the Society's map archives have been used by the United States government in instances where its own cartographic resources were limited. President Franklin D. Roosevelt's White House map room was filled with National Geographic maps. A National Geographic map of Europe is featured in the displays of the Winston Churchill museum in London showing Churchill's markings at the Yalta Conference where the Allied leaders divided post-war Europe.

In April 2005, an Indonesian edition launched, published by Gramedia Majalah. A Bulgarian edition of the magazine published by a Sanoma Publishing joint venture launched in November, 2005 and a Slovenian edition published by Rokus launched in May, 2006. In association with Trends Publications in Beijing and IDG Asia, National Geographic has been authorized for "copyright cooperation" in China to publish the yellow border magazine, which launched with the July 2007 issue of the magazine with an event in Beijing on July 10, 2007 and another event on December 6, 2007 in Beijing also celebrating the 29th anniversary of normalization of U.S.â€"China relations featuring former President Jimmy Carter. A Serbian edition of National Geographic was launched with the November 2006 issue in partnership with a joint venture of Sanoma and Gruner + Jahr.

In contrast to the United States, where membership in the National Geographic Society was until recently the only way to receive the magazine, the worldwide editions are sold on newsstands in addition to regular subscriptions. In several countries, such as Hungary, Slovenia, Croatia, Turkey and Ukraine National Geographic paved the way for a subscription model in addition to traditional newsstand sales.

On May 1, 2008, National Geographic won three National Magazine Awardsâ€"an award solely for its written contentâ€"in the reporting category for an article by Peter Hessler on the Chinese economy; an award in the photojournalism category for work by John Stanmeyer on malaria in the Third World; and a prestigious award for general excellence.