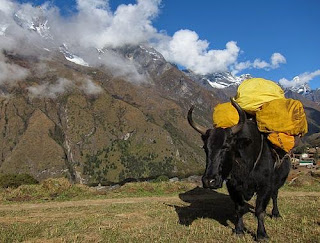 A dzo (Tibetan à½˜à½›à½¼à¼‹ mdzo) is a hybrid between the yak and domestic cattle. The word dzo technically refers to a male hybrid, while a female is known as a dzomo or zhom. Alternative Romanizations of the Tibetan names include dzho, zho and zo. In Mongolian it is called khainag (Ñ…Ð°Ð¹Ð½Ð°Ð³). There is also the English language portmanteau term of yakow; a combination of the words yak and cow, though this is rarely used.

Dzomo are fertile (or, fecund) while dzo are sterile. As they are a product of the hybrid genetic phenomenon of heterosis (hybrid vigor), they are larger and stronger than yak or cattle from the region. In Mongolia and Tibet, khainags are thought to be more productive than cattle or yaks in terms of both milk and meat production.

Dzomo can be back crossed. As a result, many supposedly pure yak or pure cattle probably carry each other's genetic material. In Mongolia and Tibet, the result of a khainag crossed with either a domestic bull or yak bull is called ortoom (three-quarter-bred) and an ortoom crossed with a domestic bull or yak bull results in a usan gÃ¼zee (one-eighth-bred).