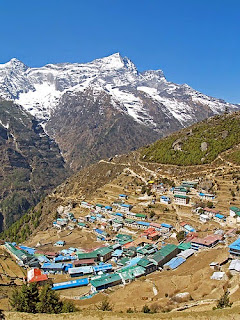 Namche Bazaar (also Nemche Bazaar or Namche Baza; Nepali: à¤¨à¤¾à¤®à¥à¤šà¥‡ à¤¬à¤œà¤¾à¤°Â listenÂ ) is a village and Village Development Committee (Namche) in Solukhumbu District in the Sagarmatha Zone of north-eastern Nepal. It is located within the Khumbu area at 3,440 metres (11,286Â ft) at its low point, populating the sides of a hill. Most of Sherpa are in the tourism business, specially from Namche area, Namche is the main trading center and hub for the Khumbu region with many Nepalese officials, a police check, post and a bank. Namche is the most expensive place in Nepal, at least thrice as expensive as the capital city Kathmandu.

At the time of the 2001 Nepal census, it had a population of 1647 people residing in 397 individual households. Namche Bazaar is popular with trekkers in the Khumbu region, especially for altitude acclimatization, and is the gateway to the high Himalaya. The town has a number of lodgings and stores catering to the needs of visitors as well as a number of internet cafÃ©s.

On Saturday mornings, a weekly market is held in the center of the village. There may also be a daily Tibetan market where clothing and cheap Chinese consumer goods tend to be the main articles for sale.

Namche has cool, wet summers and chilly, dry winters mainly affected by its altitude and the summer monsoon season.

'Namche Bazaar' is the name of a song by Nathan Rogers on his album 'The Gauntlet.' The song was inspired by the mixing of culture along the silk road.