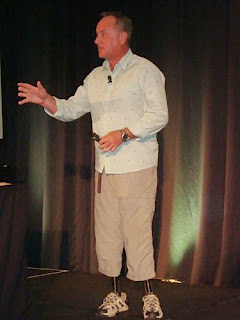 Mark Joseph Inglis, ONZM (born 27 September 1958) is a mountaineer, researcher, winemaker and motivational speaker. He holds a degree in Human Biochemistry from Lincoln University, New Zealand, and has conducted research on Leukaemia. He is also an accomplished cyclist and, as a double leg amputee, won a silver medal in the 1Â km time trial event at the Sydney 2000 Paralympic Games.

In addition to being a goodwill ambassador for the Everest Rescue Trust, Inglis has created a New Zealand based charitable trust Limbs4All. He has also created a range of sports drinks and energy gels named PeakFuel. He is heavily criticized for passing a distressed David Sharp without offering any assistance. Sharp was in a grave condition and eventually died.

Inglis began work as a professional mountaineer in 1979 as a search and rescue mountaineer for Aoraki/Mount Cook National Park. In 1982 Inglis and climbing partner Philip Doole were stuck in an snow cave on Aoraki/Mount Cook for 13 days due to an intense blizzard. The rescue of the two climbers was a major media event in New Zealand. Both men's legs became badly frost bitten while awaiting rescue. Following Inglis' rescue, both his legs were amputated below the knee. He returned to Mt. Cook in 2002 and reached the summit successfully on 7 January of that year, after a previous attempt was thwarted by problems with his leg stumps. The summit assault in January 2002 was documented by the film No Mean Feat: The Mark Inglis Story.

In 2003, Inglis received the New Zealand Order of Merit as an Officer in recognition of his services to disabled people. On 27 September 2004, he successfully climbed Cho Oyu with three others, becoming only the second double amputee to summit a mountain greater than 8,000 metres (26,000Â ft) in height.

On 15 May 2006, after forty days of climbing, Inglis became the first ever double amputee to reach the summit of Mount Everest, the highest mountain in the world. While acclimatizing at 6,400 metres (21,000Â ft), a fixed-line anchor failed, resulting in Inglis falling and breaking one of his carbon fiber prosthetic legs in half. It was temporarily repaired with duct tape, while a spare was brought up from base camp. Inglis's Everest expedition was filmed for the Discovery Channel series Everest: Beyond the Limit.

He currently resides in Hanmer Springs, New Zealand, with his wife Anne and their three children.

While ascending Everest, Inglis and a party of 18 other climbers came upon distressed British climber David Sharp, but continued pushing towards the summit. Sharp subsequently died. Inglis has been criticized for this decision by many people including Sir Edmund Hillary, who said he would have abandoned any attempt at the summit to help a fellow climber. Inglis has dismissed the criticism by saying that the decision was actually made by expedition leader Russell Brice, who was at the base camp. He also stated that the "trouble is at 8,500 metres it's extremely difficult to keep yourself alive, let alone anyone else alive." Some other climbers have agreed with this assessment, claiming there is little that can be done for a seriously ill person that close to the summit. However, Phil Ainslie, a scientist and mountaineer at the University of Otago, has said that it might have been possible to revive Sharp with bottled oxygen and get him to safety.

In an e-mailed statement to the Associated Press on 10 June, the expedition leader Russell Brice contradicted comments by Inglis by saying that he only knew David Sharp was in distress when his team contacted him by radio during their descent.

Brice received many radio messages (many of which were heard by others) that night and a full log was kept. There is no record of any call from Mark Inglis. The group continued to the summit, passing David Sharp, without offering any assistance. Sharp was in a grave condition. On their descent, passing back through the cave several hours later, the group found Sharp near death. Inglis' fellow climber, Maxime Chaya (or Max) and Chaya's Sherpa mountaineering partner attempted to help David Sharp, but to no avail.