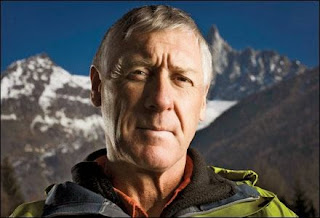 Russell Reginald Brice (born 3 July 1952) is a New Zealand mountaineer. He is also the owner/manager of Himalayan Experience Ltd., a climbing expedition company. He has summited Cho Oyu 7 times, Himal Chuli and Mount Everest (May 1997, May 1998) twice, as well as other 8000m peaks, including Manaslu (where Himalayan Experience now takes expeditions) in October 2010, which was his 14th summit of an 8000m peak. In 1988, Brice and Harry Taylor were the first climbers to successfully climb The Three Pinnacles on Everest's Northeast Ridge. He has been leading expeditions to the Himalayas since 1974.

Brice is best known for leading the 2006, 2007 and 2009 expeditions on Everest which were filmed by the Discovery Channel for three seasons of a series titled Everest: Beyond the Limit. The series touts Brice's experience, weather savvy, and professionalism compared to other groups on the mountain. Following the first season, Brice became part of a controversy over the death of climber David Sharp, who was found in a weakened state high on the mountain by Brice's climbers but was deemed impossible to save.

In the series, Brice says about 80% of his "mates" have died during his climbing career. Mark Jennings, UK, died in 1998 on Everest. Brice found his body at 8,200 meters. Michael Rheinberger was also one of Brice's good friends. His body remains on Everest after he died there in 1994. Rob Hall, who died on the mountain in the 1996 disaster was also a friend.

Brice's expertise has also been used for many filming projects in the Himalaya, most recently for The Wildest Dream, the story of George Mallory and the expedition to locate his body which was discovered by Conrad Anker. Directed by Anthony Geffen (Atlantic Productions) and narrated by Liam Neeson, with Ralph Fiennes, Natasha Richardson, Hugh Dancy and Alan Rickman, the film was released in 2010. Brice and his company Himalayan Experience provided all of the logistics necessary for the 2 month filming process, the film crew used his Everest Base Camp in Nepal and benefited from the experience of his Sherpa team who helped carrying film equipment, and who made much of the high altitude filming possible.

Brice's expertise has also been used for filming logistics for the series Planet Earth, and the film Touching the Void.

Brice is also a co-founder of Friends of Humanity - a Geneva-based non-profit organization supporting initiatives and projects in four key areas: