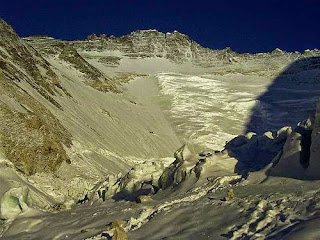 Often called the Valley of Silence, the Western Cwm (cwm (/kuËm/) is Welsh for a bowl shaped valley/cirque) is a broad, flat, gently undulating glacial valley basin terminating at the foot of the Lhotse Face of Mount Everest. It was named by George Mallory when he saw it in 1921 as part of the British Reconnaissance Expedition that was the first to explore the upper sections of Everest, searching for routes for future summit attempts.

The Western Cwm is traversed by climbers using the southeast route to the summit of Everest, and is typically accessed by climbing through the Khumbu Icefall. The central section is cut by massive lateral crevasses which bar entrance into the upper Western Cwm. In this section, climbers must cross to the far right, over to the base of Nuptse to a narrow passageway known as the Nuptse corner. From there, climbers have a stupendous view of the upper 2,400Â m (7,900Â ft) of Everestâ€"the first glimpse of Everest's upper slopes since arriving at Base Camp (the last 1,500Â m (4,900Â ft) of Everest, including its distinct black pyramid summit, are not visible from Base Camp).

The snow-covered, bowl-shaped slopes surrounding the Western Cwm reflect and amplify solar radiation, warming the valley basin despite its high elevation of 6,000Â m (20,000Â ft) through 6,800Â m (22,300Â ft). Some of the most difficult days on Everest are in the Western Cwm, when on a sunny windless day it is desperately hot, and has been known to reach temperatures up to 35Â Â°C (95Â Â°F).