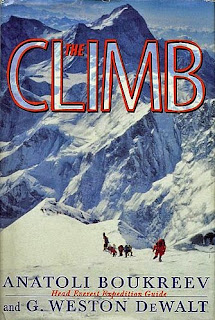 The Climb, republished as The Climb: Tragic Ambitions on Everest, is an account by Russian mountaineer Anatoli Boukreev of the 1996 Everest Disaster, during which eight climbers lost their lives on Mount Everest. The co-author, G. Weston DeWalt â€" who was not part of the expedition â€" provides accounts from other climbers and ties together the narrative of Boukreev's logbook.

The book is also partially a response to Jon Krakauer's account of the same 1996 Everest climb in his book Into Thin Air, which appeared to criticize some of Boukreev's actions during the climb.

After The Climb was published, DeWalt levelled many public criticisms at Krakauer concerning the accuracy of each man's account of what happened on the mountain during the 1996 climbs. Krakauer details the disagreements, and his rapprochement with Boukreev, in the postscript to the 1999 edition of Into Thin Air.