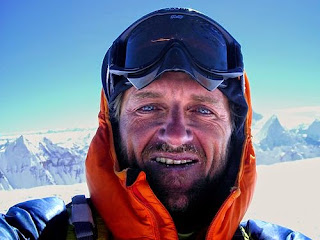 Christian Stangl (born on July 10, 1966 in Landl, Austria) is an alpine style professional mountain climber. He practices what he calls "skyrunning": rapidly climbing or running up very high mountains, directly from the base camp to the summit and back, alone, without supplementary oxygen, intermediate camps, resupplies by Sherpas, or other external help. Originally employed as an electrical technician, he became a professional climber in 2002 after having climbed Aconcagua in Argentina in 4 hours and 25 minutes. Between 2002 and 2007 he climbed the Seven Summits (Messner list) in what he called "The Seven Summits Speed Project"; he reported the total ascent time for the seven mountains from base camp to summit as a record 58 hours, 45 minutes. As part of this project, he climbed the north-east ridge of Mount Everest, alone and without oxygen, from Camp III (ABC) to the summit in the record time of 16 hours, 42 minutes; this involved an elevation difference of about 2400m and a total distance of about 10km each direction. The descent to Camp III took 6 hours, 48 minutes. This climb took place on May 25, 2006, the same day that German climber Thomas Weber died on the mountain and Australian climber Lincoln Hall was left for dead on the mountain but found alive and rescued the next day. (Earlier, in 1996, Italian climber Hans Kammerlander had reached the Everest summit from Camp III alone and without oxygen in 17 hours before skiing back down.)

The 2007 film The Skyrunner deals with Stangl's 49-minute ascent of the Carstensz Pyramid in Indonesia.

His claims of having climbed K2 on August 12, 2010, and the photo allegedly taken on the top later turned out to be incorrect: Doubts about Stangl's version were raised based on the photo from the summit and missing traces on the route supposedly taken to the summit as observed by other climbers. Fellow mountaineers also noted the complete lack of exhaustion of Stangl. On September 7, 2010, Stangl had to admit that he had "just imagined" a successful ascent because of "stress and fear of failure".

During the preparation for these extreme climbs, Stangl aims to work for 20 hours at a constant pulse rate of 164/minute. One technique involves running up a mountain while pulling a 30 kg tractor tire behind him. During his climbs, he motivates himself by uttering Russian phrases, reminding himself of the film The Hunt for Red October with Sean Connery. To combat fear he switches to English phrases.

Stangl views skyrunning as an advance of the sport of mountain climbing and holds that it is more environmentally friendly than other climbing styles which often leave remains of camps, ropes and other hardware behind. He has been criticized by more traditional climbers who claim that he diminishes the accomplishments of others.