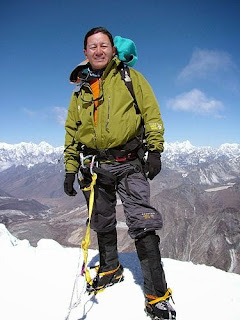 He is the son of Nepalese Sherpa mountain climber Tenzing Norgay (who first climbed Mount Everest in 1953 with Sir Edmund Hillary) and Daku, his third wife. Jamling Tenzing Norgay himself later followed in his father's footsteps and climbed Everest in 1996 with a team led by David Breashears that also included mountaineer Ed Viesturs and Araceli Segarra, an experience documented in the 1998 IMAX film, Everest. In 2002, he and Peter Hillary, the son of Edmund Hillary, were part of an expedition to climb Everest and commemorate the 50th anniversary of the first ascent.

Norgay went on to write Touching My Father's Soul, a book documenting his experiences on the summit attempt. The book was notable for the frankness with which it discussed the relationship between the often wealthy climbers and the Sherpas who obtain their incomes from assisting expeditions. Norgay's book was the first to discuss from the Sherpas' point of view the disastrous May 1996 climbing season, in which twelve climbers died. It noted, for example, that little notice is taken when Sherpas die, but much attention is focused when those lost are clients.

Norgay is an alumnus of Northland College.