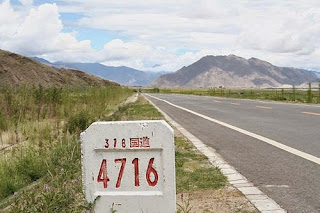 The Friendship Highway (also known as the China-Nepal Highway,Chinese: ä¸­å°¼å…¬è·¯; pinyin: Zhongni Gonglu) is a 800 kilometres (500Â mi) scenic route connecting the capital of Tibet, Lhasa, with the Chinese/Nepalese border at the Sino-Nepal Friendship Bridge between Zhangmu and Kodari. It includes the westernmost part of China National Highway 318 (Shanghai-Zhangmu) and crosses three passes over 5,000m before dropping to 1,750m at the border.

From Lhasa, the Friendship Highway follows the Kyi Chu river for about 60Â km up to the confluence with the Yarlung Tsangpo River (Brahmaputra) at Chushul. The main route continues along the Yarlung valley up to Shigatse, Tibet's second-largest city and formerly the home of the Panchen Lamas. A subsidiary branch crosses the Yarlung Tsangpo at Chushul and crosses the 4,800m high Gampa La, passes along turquoise Yamdrok Yutso lake before crossing the 5,045m high Karo La at the foot of Noijin Kangsang, and following downstream the Nyang Chu valley through Gyantse up to Shigatse.

From Shigatse, continuing west parallel to the Yarlung Tsangpo valley, the road passes Lhatse and forks just beyond at Chapu, where China National Highway 219 continues west and upriver, finally crossing the Brahmaputra/Indus divide near sacred Mount Kailash and Lake Manasarovar, then on to Ali in Gar County.

From Chapu near Lhatse, the Friendship Highway maintains the Hwy 318 route number and turns southwest and crosses the main Brahmaputra-Ganges divide at Gyatso La (5,260m), the highest pass on the road. Descending 1,000 meters onto alluvial plains of the Bum-Chu, also known as the Arun river in Nepal, the highway passes near Shelkar (New Tingri) then through Old Tingri, both gateways to Rongbuk Monastery and the north side of Mount Everest.

Continuing southwest, the highway climbs over Lalung La (5,050m/16,570') and crosses shortly after the Tong La (also known as Thong La, Yakri Shung La or Yakrushong La) (5,150m/16,900'), which marks the water divide between the Bum-Chu / Arun and the (Matsang Tsangpo / Sun Kosi) rivers. The Friendship Highway then descends along the Matsang Tsangpo through Nyalam, then more steeply through a canyon to Zhangmu. The road ends at the Friendship Bridge on the China-Nepal border at a mere 1,750m/5,740' elevation. The continuation of the road between the border town of Kodari to Kathmandu is named Arniko Rajmarg.