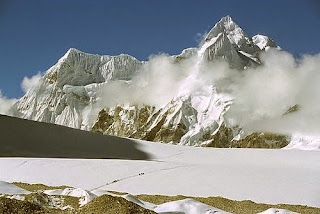 Nangpa La (el. 5,806Â m or 19,050Â ft) is a high mountain pass crossing the Himalayas and the Nepal-Tibet Autonomous Region border a few kilometres west of Cho Oyu and some 30Â km (20Â mi) northwest of Mount Everest. A foot-trail over Nangpa La is the traditional trade and pilgrimage route connecting Tibetans and Sherpas of Khumbu. This was the location of the 2006 Nangpa La shootings.

From this pass the Mahalangur section of the Himalaya extend east past Cho Oyu, Gyachung Kang, Everest, Ama Dablam and Makalu to the gorge of the Arun River. The Rolwaling Himalayas including Gauri Sankar and Melungtse rise west and southwest of the pass.

In 2006, Chinese border guards of the People's Armed Police (PAP) opened fire on 75 unarmed Tibetan refugees as they traversed waist-deep snow in the Nangpa La shooting incident, killing 17 year old Buddhist nun Kelsang Namtso and leading to the disappearance of a further 17 refugees. Despite an attempted Chinese coverup, several foreign climbers at base camps on Cho Oyu managed to video and photograph the situation as it unfolded and the events drew widespread international condemnation when shown to the outside world.