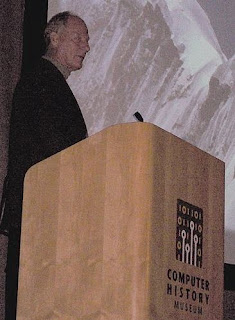 This article is about the mountaineer. For the politician, see Jim Whitaker.

He is the twin brother of Lou Whittaker, a mountain guide who is often mistakenly credited with that achievement.

He was the first full-time employee of Recreational Equipment Inc. and was the company's CEO in the 1960s. Now, Whittaker is chairman of the Board of Magellan Navigation, a company that produces handheld global positioning system (GPS) units.

In 1965 he guided Robert Kennedy up the newly named Mount Kennedy.

He led the Earth Day 20 International Peace Climb that brought together climbers from the United States, USSR and China to summit Mount Everest. In addition to putting more than a dozen climbers on the summit, the expedition hauled off a large amount of trash left on the mountain by previous expeditions.

In 1999 Whittaker released his autobiography, A Life on the Edge: Memoirs of Everest and Beyond.