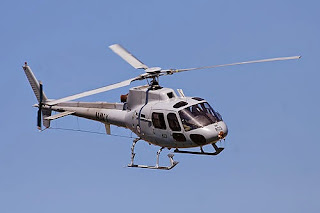 The Eurocopter AS350 Ã‰cureuil (Squirrel) is a single-engine light helicopter originally designed and manufactured in France by AÃ©rospatiale (now Airbus Helicopters). In North America, the AS350 is marketed as the AStar. The AS355 Ecureuil 2 is a twin-engine variant, marketed in North America as the TwinStar. The Eurocopter EC130 is a derivative of the AS350 airframe and is considered to be part of the Ã‰cureuil single-engine family. In the early 1970s, AÃ©rospatiale began development to replace the aging Alouette II design. The result was the AS350 design. The first prototype, powered by a Lycoming LTS101 turboshaft made its maiden flight on 27 June 1974, with the second prototype, powered by a Turbomeca Arriel 1A following on 14 February 1975. The Arriel powered version, the AS350B, intended for sale throughout the world except for North America, was certified in France on 27 October 1977, while the Lycoming powered AS350C (or AStar) was certified by the US Federal Aviation Administration on 21 December 1977. Customer deliveries began in March 1978 for the AS350B and April 1978 for the AS350C.

The HelicÃ³pteros do Brasil (Helibras) subsidiary of Eurocopter signed a contract for a major upgrade program on the Brazilian Armyâ€™s fleet of 36 AS350 Ecureuils.

AS350
Prototype.
AS350 Firefighter
Fire fighting version.
AS350B
Powered by one Turbomeca Arriel 1B engine.
AS350 B1
Improved version of the original AS350B, which is powered by one Arriel 1D engine, type also fitted with AS355 main rotor blades, AS355 tail rotor with tabs and a tail rotor servo.
AS350 B2
Higher gross weight version powered by one Arriel 1D1 engine over the B1 version with aerodynamic strake fitted to tail boom along the starboard side and angled engine exhaust duct for better yaw control.
AS350 B3
High-performance version, is powered by an Arriel 2B engine equipped with a single channel (DECU) Digital Engine Control Unit with a mechanical backup system. This helicopter is the first ever to land on the summit of Mount Everest. AS350 B3/2B1 variant introduces enhanced engine with dual channel (FADEC) Full Authority Digital Engine Control, dual hydraulics and a 2,370 kg (5,225 lb) Maximum Take Off Weight. AS350 B3e (introduced late 2011) equipped with the Arriel 2D engine.
AS350 BA
Powered by a Arriel 1B engine and fitted with wider chord AS355 main rotor blades and tail rotor servo.
AS350 BB
AS350 B2 variant selected to meet rotary-wing training needs of UK MoD, through its Defence Helicopter Flying School in 1996. Powered by a derated Arriel 1D1 engine to improve the helicopters' life cycle.

The AS350 is in service around the world operated by private individuals, airline and charter operators, emergency medical teams, governments and law enforcement agencies.

â€  4, 5, & 6 passengers options available. The 6 passenger configuration is a relatively uncommon high-density seating option that replaces one front seat with a two-person bench and the pilot relocated to the left side of the cockpit.