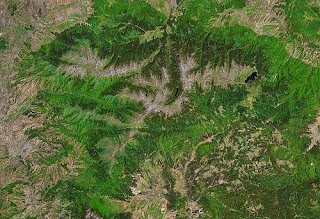 Rila (Bulgarian: Ð Ð¸Ð»Ð°, pronouncedÂ [ËˆriÉ«É]) is a mountain range in southwestern Bulgaria and the highest mountain range of Bulgaria and the Balkans, with its highest peak being Musala at 2,925 m. The massif is also the sixth highest mountain in Europe (when each mountain is represented by its highest peak only), coming after the Caucasus, the Alps, Sierra Nevada, the Pyrenees and Mount Etna, and the highest between the Alps and the Caucasus. More than one-third of the mountain is occupied by the Rila National Park.

The name Rila is believed to be of Thracian origin and is thought to mean "well-watered mountain", owing to Rila's abundance of glacial lakes (about 200) and hot springs in fault areas at the base of the mountain. Some of the Balkans' longest and deepest rivers originate from Rila, including the Maritsa, the Iskar and the Mesta.

Culturally, Rila is famous for the Rila Monastery, Bulgaria's largest and most important monastery, founded in the 10th century by Saint John of Rila. Alongside the cultural landmarks the mountain is also famous for the Seven Rila Lakes.

Rila is a dome-shaped horst mountain, part of the Balkans' oldest land, the Macedono-Thracian Massif. It was formed by granite and gneiss rocks and crystal schists during the Paleozoic (250,000,000 years ago). Rila's alpine relief was formed during the Pleistocene by a series of glacial periods. During the most recent, so-called WÃ¼rm glaciation, 10-12,000 years ago the permanent snow line was at 2,100 m above sea level. Above this line glaciers radically changed the existing relief, carving out deep cirques, sharp pyramid-shaped peaks, rock pinnacles, various valleys, moraines and other typical glacial formations.

Rila has an area of 2,400Â kmÂ². The dome of the mountain rises over the surrounding mountain valleys, with the Borovets Saddle (1,305 m) connecting the main Musala Ridge with the Shipchan and Shumnitsa ridges that connect to the Ihtiman Sredna Gora mountains through the Gate of Trajan pass. The Yundola Saddle (1,375 m) and the Abraham Saddle (1,295 m) link Rila with the Rhodopes to the east, while the connection with Pirin is the Predel Saddle (1,140 m), the one with Verila being the Klisura Saddle (1,025 m).

The climate is typically alpine, with 2,000Â mm of precipitation on Musala yearly, about half of which is snow. The lowest average temperature ever measured in February on Musala is â€"11.6 Â°C and the absolute minimum is -31.2 Â°C. An average temperature for August is 5.4 Â°C, the maximum being 18.7 Â°C.

The flora of Rila contains three local endemics which are seen only in this mountain. These plants are Primula deorum (with the largest population), Rheum rhaponticum and Alchemilla pawlowskii. In the mountain thrives also 36 plants as Campanula lanata, Centaurea mannagettae which are endemic for the Balkans. Some of the plant species have survived the last glacial period by turning into relict organisms.
Some of the animals, which live in Rila, are in danger as well. 24 of the species that inhabit Rila are listed in the IUCN Red List of Threatened Species. There are 172 types of vertebrates living in Rila and 121 of them are registered in the Bulgarian Red List of Threatened Species, 15 are recorded in the European Red List of Threatened Species, 24 are listed in the International Union for Conservation of Nature and 158 of 172 are included in the Bern Convention lists. Such animals are Barbus cyclolepis (which is rare because of the habitat loss and the river pollution), Triturus alpestris, Spermophilus citellus (European Ground Squirrel) and others.

There are 48 mammal species in National park Rila

Rila is subdivided into several parts depending on their geographic position.

Rila Point on Livingston Island in the South Shetland Islands, Antarctica is named after Rila Mountain.