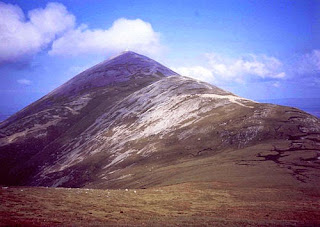 Croagh Patrick (Irish: Cruach PhÃ¡draig, meaning "(Saint) Patrick's Stack"), nicknamed the Reek, is a 764 metres (2,507Â ft) mountain and an important site of pilgrimage in County Mayo in Ireland. It is 8 kilometres (5Â mi) from Westport, above the villages of Murrisk and Lecanvey. It is the third highest mountain in County Mayo after Mweelrea and Nephin. It is climbed by pilgrims on Reek Sunday every year, which is the last Sunday in July. It forms the southern part of a U-shaped valley created by a glacier flowing into Clew Bay in the last Ice Age. Croagh Patrick is part of a longer east-west ridge; the westernmost peak is called Ben Gorm.

Croagh Patrick comes from the Irish Cruach PhÃ¡draig meaning "(Saint) Patrick's stack". It is known locally as "the Reek", a Hiberno-English word for a "rick" or "stack". In pagan times it was known as CruachÃ¡n Aigle, being mentioned by that name in sources such as Cath Maige Tuired, Buile Shuibhne, The Metrical Dindshenchas, and the Annals of Ulster entry for the year 1113. CruachÃ¡n is simply a diminutive of cruach "stack", but it is not certain what Aigle means. It is either from the Latin loan aquila "eagle" (more usually aicile or acaile) or a person's name. In addition to its literal meaning, cruach in the pagan name may also have some connection with Crom Cruach.

The Marquess of Sligo, whose seat is nearby Westport House, bears the titles Baron Mount Eagle and Earl of Altamont, both deriving from alternative names (CruachÃ¡n Aigle; high mount) for Croagh Patrick.

Croagh Patrick has been a site of pagan pilgrimage, especially for the summer solstice, since 3,000 B.C. It is now a site of Christian pilgrimage associated with Saint Patrick who reputedly fasted on the summit for forty days in the fifth century A.D. Thousands of people climb the mountain every Reek Sunday, which is the last Sunday in July. The climb is led by Archbishop of Tuam every year. From St. Patrick's own time there had been some sort of a little chapel on the summit, called "Teampall Phadraig". an archaeological excavation in 1994 found the remains of a foundation at the summit. In 824 the Archbishops of Armagh and Tuam disagreed as to who had jurisdiction.

A small chapel was built on the summit and dedicated on 20 July 1905. During the pilgrimage on 31 July 2005, a plaque commemorating its centenary was unveiled by Michael Neary, the Archbishop of Tuam.

It was decided in 2005 to open the church every day during the summer, rather than only on holy days. Mass is celebrated in the church on Reek Sunday and on 15 August. It is opened by information guides.

A seam of gold was discovered in the mountain in the 1980s: overall grades of 14 grams of gold per tonne in at least 12 quartz veins, which could produce 700,000 tonnes of ore â€" potentially over 300,000 troy oz of gold (worth over â‚¬360m). However, due to local resistance by the Mayo Environmental Group headed by Paddy Hopkins, Mayo County Council decided not to allow mining.