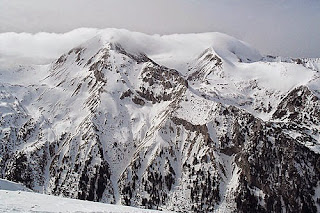 The Pirin Mountains (Bulgarian: ÐŸÐ¸Ñ€Ð¸Ð½) are a mountain range in southwestern Bulgaria, with Vihren (2,914 m high) the highest peak, situated at 41Â°45â€²50â€³N 23Â°25â€²30â€³E. The range extends about 40Â km northwest-southeast, and about 25Â km wide. Most of the range is protected in the Pirin National Park. The mountain is named after Perun (Cyrillic: ÐŸÐµÑ€ÑƒÐ½), the highest god of the Slavic pantheon and the god of thunder and lightning.

To the north Pirin is separated from Bulgaria's highest mountain range, the Rila Mountains, by the Predel saddle, while to the south it reaches the Slavyanka mountain. To the west is located the valley of the Struma and to the east of the Mesta Rivers. Pirin is noted for its rich flora and fauna. Much of the area is forested, with the best conifer woods in Bulgaria, holding important populations of the Balkan endemic species Macedonian Pine, Bosnian Pine and Bulgarian Fir. Animals include the wolf and the Brown Bear.

Pirin is the second highest mountain range in Bulgaria after Rila (2,925 m) and the eighth highest in Europe after the Caucasus, the Alps, Sierra Nevada, the Pyrenees, Mount Etna, the aforementioned Rila, and Mount Olympus when each is represented by its highest peak only. It has an area of 2,585Â kmÂ² and an average height of 1,033 m. Pirin is set in the southwest of the country between the Struma and Mesta Rivers, bordering Rila to the north at the Predel Saddle (1,142 m) and Slavyanka to the south at the Parilska Saddle (1,170 m). The distance between these two points is 60Â km from the northwest to the southeast and the maximum width of Pirin is 40Â km from the town of Sandanski to the village of Obidim. Other neighbouring mountains include Vlahina, Maleshevo, Osogovo and Ograzhden to the west, as well as the Rhodopes to the east.

Geologically and geographically Pirin is divided into three parts: a north, central and south one, which are however not equal in size and tourist attractivity.

Â§Geology, relief and peaks in Pirin

By its geological structure Pirin is a massive elevation with granite nucleus (the granite surface is 62%) covered mainly with ancient metamorphous rocks. It forms as a mountain during the Tertiary. Its hoisting alternated with long tranquil periods. Glaciation occurred in the beginning of the Quaternary. According to some scientists there were even two glaciations, during which the lower line of the ice was at 2,200-2,300 metres. These glaciations lead to partial crushings in the granite peaks and gradually formed beautiful alpine edges, moraine fields and vertical cliffs dropping to dizzy abysses. During that very period the granite peaks lowered and the present marble peaks took a leading position in height, because of the specifities of the marble. As a result of the ice many cirques were formed most of which now contain shining glacial lakes.

The main Pirin ridge is clearly distinguished; it begins in Rila, passes through the Predel saddle and all the saddles as far as the Parilska saddle. It links the separate smaller ridges of the mountain into one system with the highest peaks situated on it. Although it curves a lot, its main direction is from the northwest to southeast and it is also a watershed between the Struma and Mesta valleys. There are many spurs but four of them are so large that they create the appearance of the mountain: Sinanishko, Todorino, Polejansko and Kamenishko.

Pirin is known with its abundance of water. Many rivers take their sources from the mountains; they belong to the Struma and Mesta catchment areas. The rivers are short, turbulent and with high waters, with high inclination which forms many leaps and rapids. There is only one distinctive waterfall, the Popinolashki waterfall, which is 12 m high. The main ridge is the watershed between the two catchment areas.

Noticeable rivers which flow into the Mesta are:

Noticeable rivers which flow into the Struma are:

One of the most picturesque parts of Pirin's landscape are 176 crystal-clear mountain lakes which are called the eyes of the mountain in the Bulgarian folklore. All of them have glacial origin and are usually situated at the bottom of spectacular cirques surrounded by rugged marble slopes and snow-capped peaks. The largest lake is the Popovo Lake, which is also the deepest one in Pirin. Other beautiful lakes include Banderishki Lakes, Valyavishki Lakes, Vasilashki Lakes, Vlahini Lakes, Kremenski Lakes, Samodivski Lakes, Sinanishko Lake. The lakes are extremely popular among the tourists. The largest lake in Pirin by surface area is fourth in Bulgaria, the deepest lake is second in the country, which the highest lake is also the highest not only in Bulgaria but also in the Balkans.

The largest and most important lake groups are:

There are also many lakes which are not part of groups: Sinanishko, Bezbozhko, Dautovo and others.

There are also tiny glaciers (ice which does not melt throughout the year): Snezhnika in the Golemiya Kazan (The Big Cauldron) under Vihren (90x40 m), Banski Suhodol Glacier under Kutelo and under Kamenitsa.

Pirin has rich and varied flora and fauna. More than 1,300 plant species have been found up to this moment, which is roughly 1/3 all plant species to be found in the country; 320 lichen species; several hundred algae species. There are 18 endemic plant species which include Pirin Poppy, Pirin Meadowsweet, Pirin Thyme, David Mullein and other. Many plants are extremely rare and under protection such as the beautiful Edelweiss. The vegetation is vertically zoned into three elevation lines: tree, subalpine and alpine. The tree line is covered predominantly with coniferous species such as European Black Pine, Scots Pine, Macedonian Pine, Bosnian Pine, Spruce, Bulgarian Fir and reaches approximately altitude of 2,000 m. Up to 2,500 m is the subalpine line, dominated by Mountain Pine and Juniper whose size decrease as the altitude rises. The alpine line is situated above 2,500 m, covered with grass, moss, lichen and abundant in Bilberry. The vegetation around the streams and the lakes is more specific with Pinworm being common. The most famous tree in Pirin is the Baikushev's Pine, names after the forest-guard who found it. This tree is more than 1,300 years old which makes it almost as ancient as Bulgaria.

There are more than 2,000 invertebrates (spiders, centipedes, insects, snails) and 250 vertebrate species. The latter include 177 bird, 45 mammal and only 6 fish species. Many of these are endangered and need special protection: The most common animals include The most common animals include: Chamois, Brown Bear, Wolf, Roe Deer, Red Deer, Wild boar, Eurasian Badger, Red Fox, Eagles and Falcons, Capercaillie, Eurasian Eagle-Owl, Woodpeckers.

In order to protect the rich wildlife in the mountain the Vihren National Park was created in 1962, which was renamed Pirin National Park in 1975. It has an area of 403,32Â kmÂ². The park protects the largest forests of Macedonian and Bosnian Pine in the country as well as many rare and endemic species. There are several nature reserves which account for 15% of the total area. The National Park was designed a UNESCO World Heritage Site in 1983.

Pirin Glacier on Graham Land in Antarctica is named after Pirin Mountain.