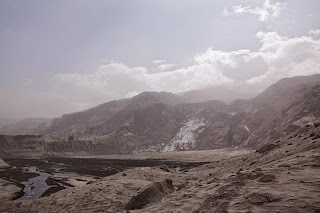 EyjafjallajÃ¶kull (pronounced [ËˆeÉªjaËŒfjatlaËŒjÅ"ËkÊtlÌ¥]; Icelandic for "glacier of EyjafjÃ¶ll") is one of the smaller ice caps of Iceland, situated to the north of SkÃ³gar and to the west of MÃ½rdalsjÃ¶kull. The ice cap covers the caldera of a volcano with a summit elevation of 1,651 metres (5,417Â ft). The volcano has erupted relatively frequently since the last glacial period, most recently in 2010.

EyjafjallajÃ¶kull consists of a volcano completely covered by an ice cap. The ice cap covers an area of about 100 square kilometres (39Â sqÂ mi), feeding many outlet glaciers. The main outlet glaciers are to the north; GÃ­gjÃ¶kull, flowing into LÃ³niÃ°, and SteinholtsjÃ¶kull, flowing into SteinholtslÃ³n. In 1967 there was a massive landslide on the SteinholtsjÃ¶kull glacial tongue. On 16 January, 1967 at 13:47:55 (or 1:47:55 PM) there was an explosion on the glacier. It can be timed because the seismometers in KirkjubÃ¦jarklaustur monitored the movement. When about 15,000,000 cubic metres (529,720,001 cubic feet) of material hit the glacier a massive amount of air, ice, and water began to move from under the glacier out into the lagoon at the foot of the glacier.

The mountain itself, a stratovolcano, stands 1,651 metres (5,417Â ft) at its highest point, and has a crater 3â€"4 kilometres (1.9â€"2.5Â mi) in diameter, open to the north. The crater rim has three main peaks, being (clockwise from the north-east) GuÃ°nasteinn, 1,500 metres (4,900Â ft) (approx), HÃ¡mundur, 1,651 metres (5,417Â ft) and GoÃ°asteinn, 1,497 metres (4,911Â ft). The south face of the mountain was once part of Iceland's Atlantic coastline, from which, over thousands of years, the sea has retreated some 5 kilometres (3.1Â mi). The former coastline now consists of sheer cliffs with many waterfalls, of which the best known is SkÃ³gafoss. In strong winds, the water of the smaller falls can even be blown up the mountain. The area between the mountain and the present coast is a relatively flat strand, 2 to 5Â km (1 to 3 miles) wide, called EyjafjÃ¶ll.

The volcano is fed by a magma chamber under the mountain, which in turn derives from the tectonic divergence of the Mid-Atlantic Ridge. It is part of a chain of volcanoes stretching across Iceland. Its nearest active neighbours are Katla, to the northeast, and Eldfell, on Heimaey, to the southwest. The volcano is thought to be related to Katla geologically, in that eruptions of EyjafjallajÃ¶kull have generally been followed by eruptions of Katla.

The EyjafjallajÃ¶kull volcano erupted in 920, 1612 and again from 1821 to 1823 when it caused a glacial lake outburst flood (or jÃ¶kulhlaup). It erupted three times in 2010â€"on 20 March, Aprilâ€"May, and June. The March event forced a brief evacuation of around 500 local people, but the 14 April eruption was ten to twenty times more powerful and caused substantial disruption to air traffic across Europe. It caused the cancellation of thousands of flights across Europe and to Iceland.

The name means "glacier" (or more properly here "ice cap") of the EyjafjÃ¶ll. The word jÃ¶kull, meaning glacier or ice cap, is cognate with the Middle English word ikel surviving in the -icle of English icicle).

EyjafjÃ¶ll is the name given to the southern side of the volcanic massif together with the small mountains which form the foot of the volcano.

The name EyjafjÃ¶ll is made up of the words eyja (genitive plural of ey, meaning eyot or island), and the plural word fjÃ¶ll, meaning fells or mountains), and together literally means: "the mountains of the islands". The name probably refers to the close-by archipelago of Vestmannaeyjar. The stratovolcano, whose vents follow an east-west trend, is composed of basalt to andesite lavas. Most of its historical eruptions have been explosive. However, fissure vents occur on both (mainly the west) sides of the volcano.

Some damage was caused by a minor eruption in 1821. Notably, the ash released from the eruption contained a large fraction of fluoride, which in high doses may harm the bone structure of cattle, horses, sheep and humans. The eruption also caused some small and medium glacier runs and flooding in nearby rivers MarkarfljÃ³t and HoltsÃ¡. The eruptive phase started on 19 and 20 December 1821 by a series of explosive eruptions and continued over the next several days. The sources describe heavy ash fall in the area around the volcano, especially to the south and west.

After that event the sequence of eruptions continued on a more subdued level until June 1822.

From the end of June until the beginning of August 1822, another sequence of explosive eruptions followed. The eruption columns were shot to considerable heights, with ashfall in both the far north of the country, in EyjafjÃ¶rÃ°ur, and in the southwest, on the peninsula of Seltjarnarnes near ReykjavÃ­k.

The period from August to December 1822 seemed quieter, but farmers attributed the death of cattle and sheep in the EyjafjÃ¶rÃ°ur area to poisoning from this eruption, which modern analysis identifies as fluoride poisoning. Some small glacier runs occurred in the river HoltsÃ¡. A bigger one flooded the plains near the river MarkarfljÃ³t. The sources do not indicate the exact date.

In 1823, some men went hiking up on EyjafjallajÃ¶kull to inspect the craters. They discovered a fissure vent near the summit caldera a bit to the west of GuÃ°nasteinn.

In early 1823, the nearby volcano Katla under the MÃ½rdalsjÃ¶kull ice cap erupted and at the same time steam columns were seen on the summit of EyjafjallajÃ¶kull.

The ash of EyjafjallajÃ¶kullâ€™s 1821 eruptions is to be found all over the south of Iceland. It is dark grey in colour, small-grained and intermediate rock containing about 28â€"40% silicon dioxide.

In April 2010, seismic activity was detected in the volcano area, with thousands of small earthquakes (mostly magnitude 1â€"2 on the Richter magnitude scale, with only a couple greater than 3 magnitude) 7â€"10 kilometres (4.3â€"6.2Â mi) beneath the volcano. On 26 February 2010, unusual seismic activity along with rapid expansion of the Earth's crust was registered by the Meteorological Institute of Iceland. This gave geophysicists evidence that magma was pouring from underneath the crust into the magma chamber of the EyjafjallajÃ¶kull volcano and that pressure stemming from the process caused the huge crustal displacement at Ãžorvaldseyri farm. The seismic activity continued to increase and from 3â€"5 March, close to 3,000 earthquakes were measured at the epicenter of the volcano.

The eruption is thought to have begun on 20 March 2010, about 8 kilometres (5.0Â mi) east of the top crater of the volcano, on FimmvÃ¶rÃ°uhÃ¡ls, the high neck between EyjafjallajÃ¶kull and the neighbouring icecap, MÃ½rdalsjÃ¶kull. This first eruption, in the form of a fissure vent, did not occur under the glacier and was smaller in scale than had been expected by some geologists. The fissure opened on the north side of FimmvÃ¶rÃ°uhÃ¡ls, directly across the popular hiking trail between SkÃ³gar, south of the pass, and ÃžÃ³rsmÃ¶rk, immediately to the north.

On 14 April 2010 EyjafjallajÃ¶kull resumed erupting after a brief pause, this time from the top crater in the centre of the glacier, causing jÃ¶kulhlaup (also known as meltwater floods) to rush down the nearby rivers, and requiring 800 people to be evacuated. This eruption was explosive in nature, due to melt water getting into the volcanic vent. It was estimated to be ten to twenty times larger than the previous one in FimmvÃ¶rÃ°uhÃ¡ls. This second eruption threw volcanic ash several kilometres up in the atmosphere which led to air travel disruption in northwest Europe for six days from 15 April to 21 April 2010 and also in May 2010, including the closure of airspace over many parts of Europe. The eruptions also created electrical storms. On 23 May 2010, the London Volcanic Ash Advisory Commission declared the eruption to have stopped, but stated that they were continuing to monitor the volcano. The volcano continued to have several earthquakes daily, with Volcanologists watching the volcano closely. As of August 2010, EyjafjallajÃ¶kull was considered dormant.

EyjafjallajÃ¶kull lies 25Â km (16Â mi) west of another subglacial volcano, Katla, under the MÃ½rdalsjÃ¶kull ice cap, which is much more active and known for its powerful subglacial eruptions and its large magma chamber. Each of the eruptions of EyjafjallajÃ¶kull in 920, 1612, and 1821â€"1823 has preceded an eruption of Katla. Katla has not displayed any unusual activity (such as expansion of the crust or seismic activity) during the 2010 eruptions of EyjafjallajÃ¶kull, though geologists have been concerned about the general instability of Katla since 1999. Some geophysicists in Iceland believe that the EyjafjallajÃ¶kull eruption may trigger an eruption of Katla, which would cause major flooding due to melting of glacial ice and send up massive plumes of ash. On 20 April 2010, Icelandic President Ã"lafur GrÃ­msson said "the time for Katla to erupt is coming close...we [Iceland] have prepared...it is high time for European governments and airline authorities all over the world to start planning for the eventual Katla eruption".

Volcanologists continue to monitor Katla, aware that any eruption from Katla following an eruption from EyjafjallajÃ¶kull has historically occurred within months of an EyjafjallajÃ¶kull eruption. The Icelandic Meteorological Office updates its website with reports of quakes both at EyjafjallajÃ¶kull and Katla. A small eruption of Katla was confirmed on 8 July 2011, after a harmonic tremor was detected. The event produced cracks on Katla's glacier and a jÃ¶kulhlaup that destroyed a bridge on the Ring Road.