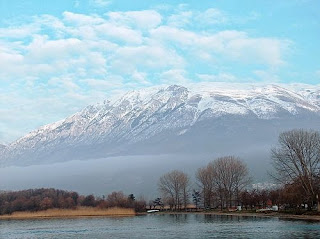 GaliÄica (Macedonian: Â Ð"Ð°Ð»Ð¸Ñ‡Ð¸Ñ†Ð°Â , is a mountain situated across the border between the Republic of Macedonia and Albania. There is a National park on the Macedonian side of the mountain, situated between the two biggest lakes in the republic: Lake Ohrid and Lake Prespa. It stretches over an area of 227 square kilometres (88Â miÂ²).

The floral life in the GaliÄica National Park represents over 1000 species, of which a large number of relicts and endems have the final frontier of its range exactly on the mountain GaliÄica. There is characteristically presence of up to now 11 discovered local endems to be found exclusively on the slopes of GaliÄica and nowhere else, this illustrates the specifically floristic composition of this mountain. At the moment, it is intensively worked on the flora of the National Park and there are indications that the number of endems will be even bigger.

Beautiful views across the lakes and neighbouring mountains can be seen from the GaliÄica peaks. The highest is peak Magaro (2,254 m).