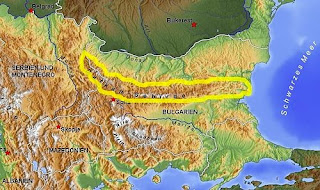 The Balkan mountain range (Bulgarian and Serbian Cyrillic: Ð¡Ñ‚Ð°Ñ€Ð° Ð¿Ð»Ð°Ð½Ð¸Ð½Ð°, Latin Serbian Stara planina, "Old Mountain"; Bulgarian pronunciation:Â [ËˆstarÉ pÉ«ÉniËˆna]; Serbian pronunciation:Â [stÃ¢ËraË planÇna]) is a mountain range in the eastern part of the Balkan Peninsula. The Balkan range runs 560Â km from the Vrashka Chuka / VrÅ¡ka ÄŒuka Peak on the border between Bulgaria and eastern Serbia eastward through central Bulgaria to Cape Emine on the Black Sea. The highest peaks of the Balkan Mountains are in central Bulgaria. The highest peak is Botev (2,376 m), located in the Central Balkan National Park (established 1991). The mountains are the source of the name of the Balkan Peninsula. The Balkan Mountains played an enormous role in the history of Bulgaria and the development of the Bulgarian nation and people.

In earlier times the mountains were known as the Haemus Mons. Scholars consider that Haemus (AncientÂ Greek: Î'á¼·Î¼Î¿Ï‚) is either derived from the Greek word Î±á¼·Î¼Î± (blood) or from an unattested Thracian word *saimon, meaning 'mountain range'. Other names used to refer to the mountains in different time periods include Aemon, Haemimons, Hem, Emus, the Slavonic Matorni gori and the Turkish Kodzhabalkan.

The Balkan Mountains are remarkable for their flora and fauna. Edelweiss grows there in the region of Kozyata stena. Some of the most striking landscapes are included in the Central Balkan National Park with steep cliffs, the highest waterfalls in the Balkan Peninsula and lush vegetation. There are a number of important nature reserves such as Chuprene, Kozyata stena and others. Most of Europe's large mammals inhabit the area including the brown bear, wolf, boar, chamois and deer.

It is believed the name was brought to the region in the 7th century by Bulgars who applied it to the area, as a part of the First Bulgarian Empire. In Bulgarian, the word balkan (Ð±Ð°Ð»ÐºÐ°Ð½) means "mountain". It may have derived from the Persian bÄlkÄneh or bÄlÄkhÄna, meaning "high, above, or proud house." The name is still preserved in Central Asia with the Balkan Daglary (Balkan Mountains) and the Balkan Province of Turkmenistan. In Turkish balkan means "a chain of wooded mountains"

In Greek, they are known as the "Haemus" (Î'á¼µÎ¼Î¿Ï‚) and the Balkan Peninsula as "Peninsula of Haemus" (Î§ÎµÏÏƒÏŒÎ½Î·ÏƒÎ¿Ï‚ Ï„Î¿á¿¦ Î'á¼µÎ¼Î¿Ï…). A folk etymology holds that 'Haemos' derives from the Greek word "haema" (Î±á¼µÎ¼Î±) meaning 'blood'. In Greek mythology during the fight between Zeus and the monster/titan Typhon, Zeus injured Typhon with a thunder and Typhon's blood fell on the mountains. It is believed that the name is derived from a Thracian word *saimon, 'mountain ridge', which is unattested but conjectured as the original Thracian form of Greek Emos. The name of the place where the range meets the Black Sea, Cape Emine, is derived from Aemon.

Geologically, the Balkan Mountains is a 'young' part of the Alp-Himalayan chain which stretches across most of Europe and Asia. It can be divided into two parts: the main Balkan Chain and the Pre-Balkans to the north, which intrude slightly into the Danubian Plain. To the south, the mountain borders with the Sub-Balkan valleys - a row of 11 valleys running from the border with Serbia to the west to the Black Sea to the east which separate the Balkan mountains from a chain of other mountains known as Srednogorie which include Vitosha and Sredna Gora.

The range consists of around 30 portions called mountains. The Balkan Mountains can be divided into three sections:

The Balkan Mountains form a water divide between the rivers flowing to the Danube in the north and those flowing to the Aegean Sea in the south. However, they are crossed by Bulgaria's widest river, the Iskar, which forms the spectacular Iskar Gorge. Rivers that take their source from the Balkan Mountains and flow northwards to the Danube include the Timok, Archar, Lom, Tsibritsa, Ogosta, Skat, Vit, Osam, Yantra, and Rusenski Lom. The mountains are also the source of the Kamchiya, which flows directly into the Black Sea. Although not so abundant in mineral waters as other parts of Bulgaria, there are several spas such as Varshets, Shipkovo and Voneshta Voda. There are a number of waterfalls, especially in the western and central parts of the range, such as Raysko Praskalo which is the highest waterfall in the Balkan Peninsula, Borov Kamak, Babsko Praskalo, Etropole Waterfall, Karlovsko Praskalo, Skaklya and others.

The mountains are crossed by 20 passes and two gorges. There are paved roads crossing the Balkan Mountains at the following passes (listed from west to east): The Balkan Mountains have had a significant and special place in the history of Bulgaria since its foundation in 681. It was a natural fortress of the Bulgarian Empire for centuries and formed an effective barrier to Moesia where most of the medieval capitals were located. The Balkan mountains were the site of numerous battles between the Bulgarian and the Byzantine Empires including the Battle of the Rishki Pass (759), Battle of the Varbitsa Pass (811), Battle of Tryavna (1190) and many others. In the battle of the Varbitsa Pass, Khan Krum decisively defeated an enormous Byzantine army, killing Emperor Nikephoros I. For many centuries the Byzantines feared these mountains, and on several occasions Byzantine armies pulled back only on the news of approaching the Balkan Mountains.

During the Ottoman rule, many haiduks found refuge in the Balkan Mountains. Close to the highest summit, Botev Peak, is Kalofer, the birthplace of Hristo Botev, a Bulgarian poet and national hero who died in the western Balkan Mountains near Vratsa in 1876 in the struggle against the Ottoman Empire. Also close to Botev Peak is the Shipka Pass, the scene of the four battles in the Russo-Turkish War, 1877-78, which ended Turkish rule in the Balkans. Close to the pass in the village of Shipka, there is a Russian Orthodox church built to commemorate Russian and Bulgarian bravery during pass defense.