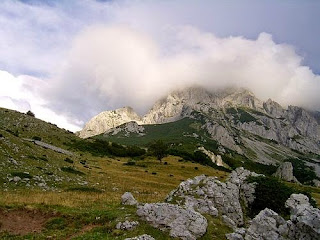 MagliÄ‡ (pronouncedÂ [mÇŽÉ¡liËtÉ•]) is the highest peak at an elevation of 2,386 metres (7,828Â ft) in the hill ranges of PljeÅ¡evica, GrmeÄ, Cincar and RaduÅ¡a in the country of Bosnia and Herzegovina. MagliÄ‡ borders Bosnia and Montenegro. It is oriented in a northwest-southeast direction. MagliÄ‡ is the highest mountain in Bosnia Herzegovina. It lies within the Sutjeska National Park, which was established in 1962. The park is drained by the Sutjeska River, the watershed of the river is partly formed by the canyon parts of MagliÄ‡ mountain; with VuÄevo (1,862 metres (6,109Â ft)) and Zelengora (2,014 metres (6,608Â ft)) also forming part of the watershed boundary.

FoÄa city near the border with Montenegro is 20 kilometres (12Â mi) away from the MagliÄ‡ massif and the nearest town is Mratinje.Karst lime stone formations in the region of limestone plateau are the general geological setting in the south and southwest region.

MagliÄ‡ massif consists of two peaks namely, the Veliki MagliÄ‡ (2,386 metres (7,828Â ft)) on the Bosnia and Herzegovina side and the Crnogorski MagliÄ‡ (2,388 metres (7,835Â ft)) on the Montenegrin side, which is 2 metres (6Â ft 7Â in) higher. The Montenegrin part of MagliÄ‡ massif has formed the TrnovaÄko Jezero (TrnovaÄko Lake), said to be "one of the most beautiful of Montenegro." This lake is a glacier lake at an elevation of 1,600 metres (5,200Â ft), is 700 metres (2,300Â ft) long and 400 metres (1,300Â ft) wide set amidst a "huge amphitheater of rocky peaks". The lake is drained from the MagliÄ‡, the Volujak and the BioÄ hill ranges. The north side of the lake which is open has the wooded Vratnice. The lake water has green-blue colour. The headwaters of Sutjeska River are in the canyon parts of MagliÄ‡ Mountain. The mountain is bounded by the Sutjeska river on the north and west, by the Volujak mountain on the southwest, by the Drina River and Piva River on the east and by the Mratinjska Uvala valley on the south. It presents a challenging climb.

The rich forests on the mountainside consist of the PeruÄ‡ica forest, a protected reserve within the Sutjeska National Park, which is the oldest and one of the two last remaining primeval forests in Europe. The northwestern slope has thick coniferous and beech trees up to elevation 1,600 metres (5,200Â ft), while in the other directions the hill slopes are very steep, barren and rocky. Pastures are found at elevations above 1,600 metres (5,200Â ft) in the plateaus. The mountain peak is accessible through the park and is visited by mountaineers and nature lovers. Most of the routes to the peak require two days of hiking. Mountaineering access to the summit of the MagliÄ‡ massif is only from the southern side, which has rich vegetation of grass and mountain pine. From the top of the peak, are scenic vistas of Volujak, Bioc, Trnovacko Lake, Durmitor (in Montenegro), apart from the Bosnian mountains in the north and northwestern direction which can be seen.