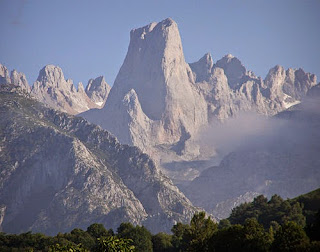 The Picos de Europa (literally: "Peaks of Europe", often abbreviated in English to the Picos) is a range of mountains 20Â km inland from the northern coast of Spain, located in the Autonomous Communities of Asturias, Cantabria and Castile and LeÃ³n, forming part of the Cantabrian Mountains. The most widely accepted origin for the name is that they were the first sight of Europe for ships arriving from the Americas.

The range consists of three major massifs: Central (also known as Urrieles), Eastern (Ãndara) and Western (also known as the Picos de CorniÃ³n). The Central and Western massifs are separated by the 1.5 kilometres (0.93Â mi) deep Cares Gorge (Garganta del Cares), with the village of CaÃ­n at its head. The waters in the Cares mostly arise from cave resurgences. Some of the water in the Cares river is diverted through a hydroelectric scheme, with a canal running in the northern wall of the gorge to CamarmeÃ±a. An access path next to the canal provides a spectacular walk.

Almost all of the rock in the Picos is limestone, and glacial action has contributed to create an impressive area of alpine karst. The highest peak is Torre de Cerredo, with an altitude of 2,650 metres at 43Â°11â€²51â€³N 4Â°51â€²06â€³W. Many other peaks reach altitudes of over 2,600 m. The area is popular with mountaineers, climbers and mountain walkers. There is a good network of well-established mountain refuges. The best-known climbing site is the Naranjo de Bulnes or Picu Urriellu, in the Urrieles massif which can be considered the most famous climb in Spain.

Cantabrian brown bears (Ursus arctos pyrenaicus) and wolves (Canis lupus signatus) live in the more remote regions. Rebeccos (Cantabrian chamois - Rupicapra pyrenaica parva) are fairly frequently seen (according to a 2006 Ministry of the Environment report, there were around 8,000 sightings that year); Choughs and Buzzards are common, various eagles and vultures are frequently seen, and there is a diverse butterfly population in the park.

Most of the region is now protected as a single Picos de Europa National Park in Cantabria, Asturias and LeÃ³n provinces of Spain; the Asturian part was Spain's first National Park. Access is via minor roads to each of the three massifs from the north and from the south to the aerial tramway at Fuente DÃ© and to CaÃ­n at the head of the Cares Canyon.

The Picos support a dwindling group of shepherds who move up from the valleys in the summer with their sheep, goats, cows, and an occasional pig. The area is famed for its piquant blue cheeses, such as Picon Tresviso Bejes.