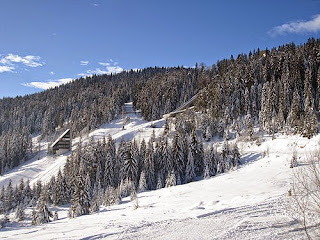 Igman (pronouncedÂ [Ã®É¡man]) is a mountain plateau in central Bosnia and Herzegovina. Geologically, Igman is part of the Dinaric Alps and formed largely of secondary and tertiary sedimentary rock, mostly Limestone. It is located southwest of Sarajevo, bordering the BjelaÅ¡nica range in the south and west, HadÅ¾iÄ‡i and IlidÅ¾a in the north, and the river Å½eljeznica in the east. Igman's highest point, Crni vrh, west of the Malo Polje road, at an altitude of 1,510 metres (4,954 feet), the homonym highest elevation on the east side of this road reaches an elevation of 1,502 metres (4,928 feet). Most of Igman is covered with mixed forest with local pastures (f.i.:Veliko Polje: Large Field, Malo Polje: Small Field). Igman was the location of the lowest recorded temperature in the region, âˆ'43Â Â°C (âˆ'45Â Â°F). When the weather is right, from Igman mountaineers can see all the way to Montenegro and the Adriatic Sea. Igman has been the site of extensive combat during the 1992-'95 Siege of Sarajevo and certain areas, in particular the surroundings of former front lines, feature a high mine risk.

During the 1984 Winter Olympics, Igman was, along with Jahorina and BjelaÅ¡nica, the location of the competition in the alpine and Nordic sports disciplines. Igman hosted primarily the Nordic disciplines; the Igman Olympic Jumps in the Malo Polje area were the site of the ski jumping events and also the ski jumping part of the Nordic combined events. Meanwhile, the Veliko Polje hosted the biathlon, cross-country skiing, and the cross-country skiing part of the Nordic combined event. In preparation of the Games a road was constructed across the Igman plateau connecting Sarajevo through HadÅ¾iÄ‡i to the Malo Polje, Veliko Polje and Babin Dol venues. There were numerous structures constructed on Igman at this time, although many stand destroyed or bear the scars of the 1992-1995 conflict. One of the most eye catching structures remains the Ski Jumping platform at Malo Polje.

Although the Igman area may probably have been the scene of military controversy in the earlier History of Bosnia and Herzegovina, the most striking events took place in the course of the 20th century. The area became of substantial military significance during the struggle between Tito's Partisans and the German occupational forces during the Second World War. A renown episode of this struggle took place on Igman during Operation SÃ¼dost Kroatien associated with what is known as the Second Enemy Offensive in January 1942. The Partisan 1st Proletarian Brigade, pursued by the German 342. Infanterie-Division, crossed Igman in what is known as the "Igman March". With temperatures reaching âˆ'32Â Â°C (âˆ'26Â Â°F), 172 Partisans suffered severe hypothermic injury, 6 of whom died.[12] When they approached the Germanâ€"Italian demarcation line south of Sarajevo, the Partisans were able to infiltrate through the weak Italian cordon. A monument in memory of the Partisan struggle in this area is to be found on Veliko Polje.

Mount Igman became in the course of the 1991-'95 conflict suddenly an area of major strategic importance as part of the 1992-1995 Siege of Sarajevo. The predominantly Bosniak villages of Hrasnica and Butmir held out as an ARBiH stronghold between the BSA-held villages of IlidÅ¾a and VojkoviÄ‡i, forming a corridor connecting the slopes of Mt Igman with the UN-controlled airport of Sarajevo. After the completion of the Sarajevo Tunnel under the airport in July 1993, the small unpaved forest road passing over Mt Igman became the sole important supply road into the besieged city. The ARBiH-controlled central plateau of Igman came under increased Serb military pressure when the suspicion became stronger that the area had become a major logistical artery of the besieged city. A major BSA offensive started July 1993 and on August 4, 1993 Serb forces captured part of the Igman supply road. The BSA advance was stopped under threat of NATO airstrikes. The area was declared a Demilitarized Zone (DMZ) by the UN after the BSA retreated and UNPROFOR units were stationed on Igman and nearby BjelaÅ¡nica. The supply road into Sarajevo was agreed to be used for humanitarian goods only, but ARBiH logistical activity on the road and through the tunnel continued nevertheless. Discussion about real or alleged reluctance to withdraw ARBiH forces from the DMZ was a growing issue between UNPROFOR Commander General Rose and ARBiH Commander General DeliÄ‡, with BSA Commander MladiÄ‡ waiting for an opportunity to close the gap. Trucks on the Igman supply road's narrow last stretch descending the steep north-eastern slope became fully exposed to fire from BSA artillery positions in IlidÅ¾a and Vojkovici. Meanwhile, the ARBiH units remaining on the plateau were formally restricted to R&R activities, notably resulting in the building of the Igman Dzamija, a wooden mosque in the forest, still much frequented today. The Igman supply road remained the almost exclusive supply route into Sarajevo until the end of the war. It was also the only entry and exit road for the Bosnian political leadership. Bosnian president Alija IzetbegoviÄ‡ and foreign secretary Muhamed Sacirbey traveled this road. Foreign negotiators tended to avoid the road as it was "often described as the most dangerous road in Europe". Forced by a Serb blockade of the Sarajevo Airport, on August 19, 1995, a US Peace Mission headed by Richard Holbrooke took this road in order to reach Sarajevo for a meeting with the Bosnian presidency. Holbrooke decided to sit with General Wesley Clark in a Humvee, while the other members of the delegation travelled in a French UNPROFOR Renault VAB Armored Personnel Carrier. At a particular exposed and narrow point -now marked by a French memorial plaque- the French APC went over the edge and rolled and tumbled down some 400 metres. US Diplomats Robert Frasure, Nelson Drew and Joe Kruzel as well as the French Corporal-driver perished in the incident. The battered APC is still to be seen where it ultimately came to a halt - next to a memorial site for the victims. By mid-1995 the military situation became very tense again, and in August 1995 the BSA launched another offensive forcing UNPROFOR from the BjelaÅ¡nica ridge and advancing again towards Veliko Polje. After the second Markale shelling, on August, 30 NATO started Operation Deliberate Force, in which NATO aircraft engaged BSA Command & Control facilities and other targets. In conjunction with these attacks a Rapid Reaction Force consisting of units of the British 19th Reg. Royal Artillery, the French 2nd Legion Etranger d'Infanterie and the Dutch 1e Mortiercompagnie of the NL Marine Corps, was deployed on Igman with (RNLA) search radars and heavy artillery, engaging any actively firing BSA artillery installation around Sarajevo until 14 September 1995, when the NATO air strikes were suspended to allow the implementation of the withdrawal of BSA heavy weapons from the Sarajevo exclusion zone, effectively ending the Siege of Sarajevo. A number of memorials and war cemetery sites is found throughout the Igman plateau.

Igman is nowadays a popular destination for mountain-biking, hiking and skiing. Skiers will find -apart from 2 baby lifts- a single major skilift at Malo Polje that will bring them to 1,490 metres (4,888 feet) with a single descent piste of 1.6 kilometres (1.0 mile) red/bleu with a black split-off of 0.2 kilometres (0.1 miles). Mountain bikers will find a vast network of forest roads on Igman. The steep north-eastern slope of Igman is especially popular with the mountain bikers, who use the former wartime supply road to climb from Hrasnica up to an altitude of 1,250 metres (4,101 feet), and then descend with some bravura via a hiking trail. This hiking trail connects the village with the main mountain hut in the area: Hrasnicki Stan. Another trail leads from Hrasnica to the Memorial for the deceased American diplomats and the memorial plaque for the French military fallen on this road and ends also at Hrasnicki Stan. From there other trails lead to the mountain hut at Malo Polje proceeding further east towards the Javornik mountain hut.

At the very foot of the mountain, close to IlidÅ¾a, are the sources of the river Bosna: Vrelo Bosne. This beautiful area is one of the most popular recreational areas of Sarajevo, and one its most important drinking water sources. Nearby lies one of the famous residential villas of Marshall Tito: Stojcevac, now fully destroyed. The area further up above Vrelo Bosne is the location of the former frontline and inaccessible because of heavy contamination with land mines and UXO. Demining activities on former frontlines have taken place and are still taking place around recreational areas and the main roads.

The Igman mountain, with its wartime legacy, has lend its name to a non-governmental/political initiative that is aimed at bringing the former belligerents in the region together. The mission of the Igman Initiative is to encourage normalization of the overall relations among the countries of the Dayton Quadrangles. The initiative was named after Mt. Igman in remembrance of the intellectual activists, who traveled from all over former Yugoslavia via the Igman Mountain Road to Sarajevo in April 1995 in solidarity with the besieged population. In November 2000, in Zagreb, a conference, â€œProspects of Relations between Bosnia-Herzegovina, the Republic of Croatia and the FRYâ€ was convened. The conference gathered more than a hundred NGOs from the nations ratifying the Dayton Agreement. The participating organizations agreed to formally join their efforts to stimulate the normalization of relations among the three countries. At the second session of the conference, held in Novi Sad, 2001, the Igman Initiative was established and a Council was appointed. The new institution would speed up the process of normalizing the relations. The Igman Initiative is now governed by four co-Presidents from Croatia, BiH, Serbia and Montenegro and its Council is currently composed of twenty members, five per country. The Igman Initiative efforts are essentially still aimed at establishing good neighbourly relations, building mutal trust and tolerance and overcoming all types of discrimination in the countries of the region.