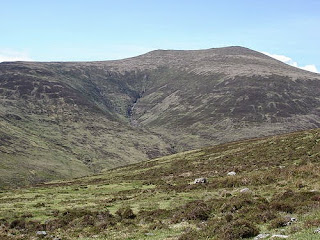 Galtymore or Galteemore (Irish: Cnoc MÃ³r na nGaibhlte, meaning "big hill of the Galtys") is a 919 m (3015 ft) mountain on the border between counties Limerick and Tipperary, Republic of Ireland. It is the highest of the Galty Mountains and the 14th highest peak in Ireland. Galtymore is notable in that it is the tallest inland mountain in Ireland, and the only inland peak to exceed 3000 feet. The townland that covers the southern face of Galtymore is called Knocknagalty (Cnoc na nGaibhlte). Galtymore is informally referred to as one of the Irish Munros and is classed as a Furth by the Scottish Mountaineering Club, i.e. a 3,000 footer outside of Scotland.

Galtymore sits near the middle of the eastâ€"west Galty mountain ridge. To the east of Galtymore is Galtybeg (799 m) and to the west is Slievecushnabinnia (766 m).

The slopes of Galtymore are steep but the summit is broad, rounded and rocky. This is due to the constant freeze-thaw action experienced by the summit during the last ice age. The north face shows much evidence of glacial erosion. It harboured a number of corrie glaciers, most of which are now occupied by loughs. Lough Diheen lies between Galtymore and Galtybeg, while Lough Curra lies between Galtymore and Slievecushnabinnia.

Galtymore is not a difficult mountain to climb (no special equipment is needed), but the Galtees are steeper than many Irish mountains and the north face is often snow-covered in the winter months. A popular starting point for the ascent of Galtymore is the "Black Road" which can be accessed from the R639 road near the village of Skeheenarinky.