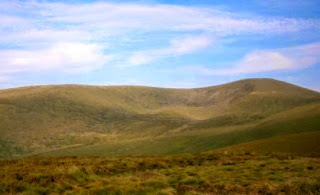 Lugnaquilla (from Irish: Log na Coille, meaning "hollow of the wood") is a 925-metre (3,035Â ft) tall mountain in County Wicklow, Ireland. It is the highest peak of the Wicklow Mountains range, the highest in the province of Leinster, and the 13th highest peak in all Ireland. Informally referred to as one of the Irish Munros, it is classed as a Furth by the Scottish Mountaineering Club.

Views, on a clear day, extend east across the Irish Sea to the hills of the LlÅ·n Peninsula and mountains of Snowdonia in Wales, and west to the mountains of Munster.

Its proximity to Dublin ensures that Lugnaquilla is a frequently climbed mountain. The three popular approaches are from Fenton's Pub in the Glen of Imaal, Glenmalure and Aghavannagh with the shortest direct route from the Glen of Imaal via Camara Hill that skirts the military artillery range. Lugnaquilla is a bulky mountain, with a large plateau-type summit, bounded on two sides by steep glacial corries called "North Prison" and "South Prison".