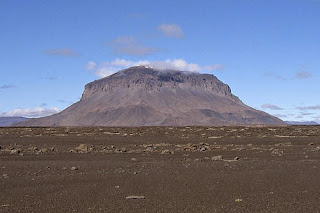 HerÃ°ubreiÃ° (Icelandic pronunciation:Â [ËˆhÉ›rÃ°ÊpreiÎ¸], broad-shouldered) is a tuya in north-east Iceland. It is situated in the Highlands of Iceland in the midst of the Ã"dÃ¡Ã°ahraun desert and close to Askja volcano. The desert is a large lava field originating from eruptions of TrÃ¶lladyngja. HerÃ°ubreiÃ° was formed beneath the icesheet that covered Iceland during the last glacial period. Due to the mountain's steep and unstable sides, the first ascent was in 1908 despite centuries of knowledge of its existence.

Near the mountain lies an oasis called HerÃ°ubreiÃ°arlindir with a campground and hiking trails. In former times, outcasts who had been excluded from Icelandic society because of crimes they had committed lived at the oasis. One such outlaw was Fjalla-Eyvindur, who lived there during the winter of 1774â€"1775.