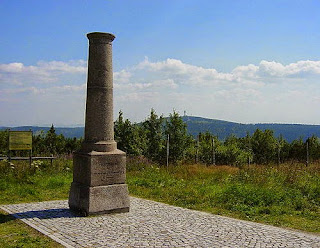 The Fichtelberg (German pronunciation: [ËˆfÉªÃ§tÉ™lbÉ›ÉÌ¯k]) is a mountain with two main peaks in the middle of the Ore Mountains in the east German state of Saxony, near the Czech border. At 1,214.6Â m (3,985Â ft) above sea level, the Fichtelberg is the highest mountain in Saxony, the second highest in the Ore Mountains and used to be the highest mountain in East Germany. Its subpeak is 1,206Â m (3,957Â ft) high.

The Fichtelberg rises within the Central Ore Mountains in the Ore Mountains/Vogtland Nature Park around 1.5Â kilometres north of the German-Czech border. At the southern foot of the mountain lies the highest town in Germany: the resort of Oberwiesenthal in the PÃ¶hlbach valley. About 750Â metres south-southwest is the less prominent subpeak of the Fichtelberg, known as the Kleiner Fichtelberg ("Little Fichtelberg") also called the Hinterer Fichtelberg ("Rear Fichtelberg"); 1,205.6Â m). About 4Â kilometres south-southeast is the highest peak in the Ore Mountains: the KlÃ­novec (Keilberg; 1,244Â m) on the Czech side of the border. In the wet valley heads and raised bogs on the Fichtelberg, numerous streams have their sources. The most important of these is the River Zschopau.

The Fichtelberg consists predominantly of light-coloured, crystalline rocks, especially a variety of muscovite slate (Muskovitschiefer). In the main, this rock only comprises quartz and muscovite; although it sometimes contains orthoclase and biotite as well. Additional components include rutile, garnet, tourmaline, hematite and ilmenite.

On the Summit of the Fichtelberg stands the Fichtelberg House (Fichtelberghaus) with its observation tower, a weather station and a prominent triangulation station of the Royal Saxon Survey (KÃ¶niglich-SÃ¤chsischen Triangulation) from 1864, where measurements of regional and national significance were carried out. The Fichtelberg Cable Car runs up the eastern slope of the mountain from Oberwiesenthal to a point near the summit.

The mountain was given its name thanks to the existing natural forests of spruce that covered it (see section on forest history). In the 16th century Georgius Agricola used the Latinised form, Pinifer (Fichtelberg)

The first albeit unreferenced evidence of a building on the summit of the Fichtelberg is found in the Historischen Schauplatz published in 1699 by Christian Lehmann, where it says:

"They certainly say / that a hundred years ago a summer house and hunting lodge / built by the SchÃ¶nburg lords / were supposedly on top of it / but now there is no longer anything to be found / because it may have given little enjoyment / even a rifle shot and thunderclap up there makes a poor noise / being swallowed up by the air so to speak."

The first definitely confirmed Fichtelberg house was built on the Fichtelberg in 1888/89 by Oskar Puschmann. It was opened on 21 July 1889 and extended for the first time in 1899. In 1910 the house was expanded again as a result of the popularity of the highest mountain in Saxony. With the construction of the Fichtelberg Cable Car in 1924 the visitor numbers climbed still further.

On the even of 25 February 1963 a fire broke out in the Fichtelberg House. 180 firemen from across the county of Annaberg were called out and took part in the firefighting. Heavy snowdrifts on the access road meant that all the firefighting equipment had to be transported up the mountain on the cable car. Hoses that had been laid from Oberwiesenthal up to the top of the mountain froze in temperatures of -15Â Â°C and the lack of water meant that they could not put the fire out. The building was razed to its foundation walls.

On 22 June 1965 the foundation stone for a new building was laid. By 1967, a modern Fichtelberg House with an austere, typically East German concrete architecture and integrated, plain, 42Â metre-high observation tower had been completed. The GDR made 12 million marks available for its construction. The new Fichtelberg House had seating for around 600. On the ground floor was a large self-service restaurant, on the upper floor was a grill bar, a concert cafÃ© and a conference room. Well known artists helped design the interior. The wooden walls of the vestibule and the room dividers in the self-service area were by Hans Brockhage. Carl-Heinz Westenburger created a mural for the end wall of the conference room, on which he depicted sporting life on the Fichtelberg. At the end of the 1990 the Fichtelberg House was converted to resemble the old building and re-opened on 18 July 1999. The newly built observation tower is only 31Â metres high.

In 1890 the publican of the Fichtelberg House recorded the first regular weather observations. On 1 January 1916 meteorologists began work in the new weather station. It was founded by Paul Schreiber and expanded into a mountain observatory in 1950.

The Fichtelberg rises above the holiday and winter sports resort of Oberwiesenthal, both connected by the Fichtelberg Cable Car (Fichtelberg-Schwebebahn). This cable car was opened in 1924, the cable is 1,175 m long with a height difference of 305 m. It takes six minutes to travel from the valley to the top of the mountain. Large car parks are available on the lower half of the mountain, but parking near the top is limited. Bus transportation is available in addition to the cable car.

The Fichtelberg Railway (Fichtelbergbahn) terminates at the southeastern foot of the mountain. This narrow gauge line, which runs from Cranzahl to Oberwiesenthal, was opened in 1897 and is 17.349Â km long.

The Fichtelberg Inn (Fichtelbergbaude), a building used as a guest house on the road leading up the Fichtelberg, caught fire on 21Â November 2009 in a suspected arson attack.

The extensive spruce forests in the area surrounding the Fichtelberg have been constantly utilised since man first settled here and have thus undergone much change. The original vegetation of the highlands and mountain ridges was fundamentally different. Pollen analyses from the Gottesgaber Moor revealed useful information about the former composition of the forest. The main tree species of the Hercynian mixed forest of the highlands - the silver fir (Abies alba), beech (Fagus sylvatica) and Norway spruce (Picea abies) - occurred in roughly equal proportions of around 30% on the ridgelines. Old church records and forest assessments contain descriptions of the original condition of the forest, showing that the Fichtelberg was covered by mixed forest consisting of the aforementioned tree species. The present dominance of the spruce is primarily a result of human influence. Improper management such as deforestation and high populations of game steadily reduced the proportion of fir and beech trees in favour of spruce. With the beginning of state forestry in Saxony in the early 19th century, the composition of species changed drastically. Forest management, which was focussed on achieving the highest net yield, saw the spruce as the perfect timber resource. Gradually other tree species were planted again.

The exposed situations of the Fichtelberg near the natural treeline provides a good habitat for many rare montane plants. Of particular note is the occurrence of numerous species that are normally found in the Alps or the Tundra of Northern Europe, including the small white orchid, common moonwort, frog orchid, Alpine clubmoss und Alpine coltsfoot.

The following protected areas are found on the Fichtelberg:

These areas overlap with the Fichtelberg Meadows (Fichtelbergwiesen) Habitat Area (FFH No. 5543-304).

On clear days, one can see to the mountains in the northern Czech Republic (the Central Bohemian Uplands, Lusatian Mountains, Jizera Mountains and Giant Mountains) and to the Bohemian Forest to the south. The area around Fichtelberg and the neighbouring KlÃ­novec mountain is famous for winter sport facilities, providing many ski lifts and cross-country ski tracks.

The journey time to the top of the mountain on the Fichtelberg Cable Car is 3Â½ minutes. There is also a bus service from Oberwiesenthal. At the summit and just below it are several parking areas for cars and busses. The mountain is also accessible on numerous footpaths. Some are part of the E3 European long distance path and the Zittau to Wernigerode long distance path.

The mountain is a magnet for cyclists and bikers. From the PÃ¶hlbach valley, two long winding roads, starting at a height of 830Â m, head towards the Czech border. After a short section on the level, it turns right towards the summit. The road runs through forested countryside that gives a strong impression that one is above 1,000Â m. The total length of this ascent is 6,600Â metres and it climbs through around 380Â metres in heigh.

The less well known and more difficult ascent starts in RittersgrÃ¼n and climbs through 556Â metres in 13.64Â kilometres. The road runs through Ehrenzipfel, Zweibach and TellerhÃ¤user. After passing through these villages there is a long steep climb that flattens out as it makes its way up to a junction signed Fichtelberg. After a further 2Â kilometres of uphill climbing it reaches the summit of the Fichtelberg.