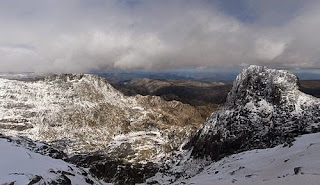 Serra da Estrela (Portuguese pronunciation:Â [ËˆsÉ›ÊÉ Ã°É (É¨)ÊƒËˆtÉ¾elÉ], "Star Mountain Range") is the highest mountain range in Continental Portugal. Together with the Serra da LousÃ£ it is the westernmost constituent range of the Sistema Central and also one of the highest in the system. It includes mainland Portugal's highest point at 1,993Â m (6,539Â ft) above mean sea level at its highest point (the summit of the Pico mountain in the Portuguese Azores islands is higher, however). This point is not a distinctive mountain summit, but rather the highest point in a plateau, being known as Torre ("Tower" in English). Torre has the unusual feature of being a summit that is accessible by paved road. The peak has a topographic prominence of 1204 m and its parent peak is Pico Almanzor, in Spain.

There is a ski resort at the summit, named Vodafone Ski Resort.

The mountain range, situated between the municipalities of Seia, Manteigas, Gouveia, Guarda and CovilhÃ£, is about 100Â km (62.14Â mi) long and is 30Â km (18.64Â mi) at its widest point. It is formed from a huge granite ridge that once formed the southern frontier of the country. Due to its bizarrely shaped crags and gorges, mountain streams and lakes, beautiful forests and magnificent views, the area ranks among Portugalâ€™s outstanding scenic attractions.

The mountain range is now part of the Serra da Estrela Natural Park and offers plentiful skiing opportunities in the ski resort of Loriga, Seia Municipality.

The CÃ£o da Serra da Estrela (Estrela Mountain Dog) is a breed of livestock guardian dog that takes its name from this region.

A legend associated with the mountain is mentioned in chapter 41 of the American literary classic, Moby-Dick:

"... the prodigies related in old times of the inland Strello mountain in Portugal (near whose top there was said to be a lake in which the wrecks of ships floated up to the surface)..."

Archaeological investigations have allowed a picture of life during the fifth millennium BC, the Early Neolithic to emerge, where small communities sustained themselves by small game hunting, the gathering of acorn and other winter fruits, and migratory pastoralism. The raising of sheep and goats, introduced to the region by the first Neolithic settlers - suggests that spring and summer were spent on high ground pastures and winter on the lower grounds of the river valleys. The significance of the Serra da Estrela in Neolithic culture can be seen in the discovery that megaliths in the Mondego River basin were predominantly built with an alignment that allowed the mountain range to be seen from within the inner chamber. At the same time the rise of Aldebaran, the brightest star of Taurus, behind the mountains could also be seen and its Heliacal rising in late April/early May could have been used as a temporal marker for the movement to the high pastures of Serra da Estrela. This archaeological narrative closely mirrors the local folklore that explains the name of the mountain range.