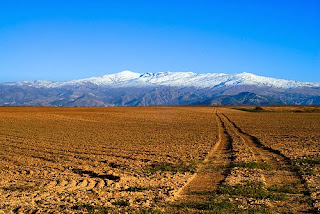 The Sierra Nevada (meaning "snowy range" in Spanish) is a mountain range in the region of Andalucia, provinces of Granada and AlmerÃ­a in Spain. It contains the highest point of continental Spain, MulhacÃ©n at 3,478 metres (11,411Â ft) above sea level.

It is a popular tourist destination, as its high peaks make skiing possible in one of Europe's most southerly ski resorts, in an area along the Mediterranean Sea predominantly known for its warm temperatures and abundant sunshine. At its foothills is found the city of Granada and, a little further, AlmerÃ­a and MÃ¡laga.

Parts of the range have been included in the Sierra Nevada National Park. The range has also been declared a biosphere reserve. The Sierra Nevada Observatory and the IRAM radiotelescope are located on the northern slopes at an elevation of 2,800 metres (9,200Â ft).


The Sierra Nevada was formed during the Alpine Orogeny, a mountain-building event that also formed the European Alps to the east and the Atlas Mountains of northern Africa across the Mediterranean Sea to the south. The Sierra as observed today formed during the Paleogene and Neogene Periods (66 to 1.8 million years ago) from the collision of the African and Eurasian continental plates.

Central to the mountain range is a ridge running broadly west-south-west - east-north-east. For a substantial distance, the watershed stays consistently above 3,000 metres (9,800Â ft).

On the southern side of the range, several long but narrow river valleys lead off towards the south-west, separated by a number of subsidiary ridges.

On the steeper and craggier northern side, the valleys have less regular orientations. This side is dominated by the Rio Genil which starts near MulhacÃ©n and into which many of the other rivers flow.

According to the KÃ¶ppen climate classification, Sierra Nevada has Mediterranean Subarctic climate (Dsc), due to the location's high elevation.