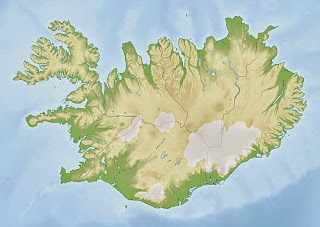 The mountain range KverkfjÃ¶ll (1,764 m) is situated on the north-eastern border of the glacier VatnajÃ¶kull in Iceland. With their glacier KverkjÃ¶kull, they are to be found between the VatnajÃ¶kull and the DyngjufjÃ¶ll (s. Askja). The mountains are still active volcanoes. Especially around 1720, they were often erupting and causing glacier runs.

Under the mountains, there is a very large, very hot magma chamber which leads to the originating of glacier caves. Currently, they cannot be visited because of the risk of collapse. There is a warning sign at the "parking place" near the caves.

In a certain distance, there are the hot springs of Hveradalir.

The Holuhraun lava field is approximately 10Â km (6.2Â mi) to the north-west of KverkfjÃ¶ll. The main volume of the JÃ¶kulsÃ¡ Ã¡ FjÃ¶llum river flows from the KverkfjÃ¶ll area.

You will need a 4x4 car to visit these places, there are several river-crossings and really bumpy road on the way.