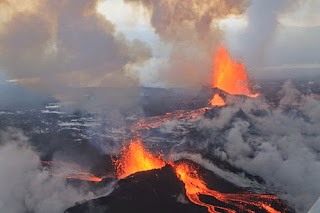 BÃ¡rÃ°arbunga is a subglacial stratovolcano located under the ice cap of VatnajÃ¶kull glacier within the VatnajÃ¶kull National Park in Iceland. It rises to 2,009 metres (6,591Â ft) above sea level, making it the second highest mountain in Iceland, about 101 metres (331Â ft) lower than HvannadalshnjÃºkur. The caldera is about 80 square kilometres, up to 10Â km wide and about 700 metres (2,300Â ft) deep. The surrounding edges rise up to 1,850 metres but the base is on average close to 1,100 metres. The volcano is covered in ice to a depth of 850m, hiding the glacier-filled crater. The associated volcanic system and fissure swarm is about 190Â km long and 25Â km wide.

BÃ¡rÃ°arbunga was a little-known volcano in Iceland due to its remote location and infrequent eruptions approximately once every 50 years, but recent studies have shown that many tephra layers originally thought to be from other volcanoes were ejected from BÃ¡rÃ°arbunga.

Sustained seismic activity has occurred in BÃ¡rÃ°arbunga for some years only recently leading to an eruption, the previous eruption was in 1910. There has been frequent volcanic activity outside the glacier to the south-west in the highlands between VatnajÃ¶kull and MÃ½rdalsjÃ¶kull, also to the north-east toward DyngjufjÃ¶ll.

Over the last seven years seismic activity has been gradually increasing in BÃ¡rÃ°arbunga and the fissure swarm to the North of the volcano. This activity reduced after the GrÃ­msvÃ¶tn eruption in May 2011, but has now returned to a similar level as before the eruption.

Throughout history there have been large eruptions every 250â€"600 years. In 1477, the largest eruption from BÃ¡rÃ°arbunga had a volcanic explosivity index (VEI) of 6; there is evidence of many smaller eruptions during the past 10,000 years.

ÃžjÃ³rsÃ¡ Lava, the largest holocene lava flow on earth, originated from BÃ¡rÃ°arbunga about 8,500 years ago, with a total volume of 21 to 30 cubic kilometres and covering approximately 950 square kilometres.

Many large eruptions have occurred south-west of the glacier, the first since human settlement of Iceland was the VatnaÃ¶ldur eruption about 870 which had a volcanic explosivity index (VEI) of 4.

The VeiÃ°ivÃ¶tn eruption in 1477 is the largest known Icelandic eruption, with a VEI of 6.

Studies of tephra layers have shown that a number of eruptions have occurred beneath the glacier, probably in the north-east of the crater or in BÃ¡rÃ°arbunga. There have also been smaller eruptions in an ice-free area of DyngjuhÃ¡ls to the north-east. Eruptions appear to follow a cycle: there were several eruptions in the glacier between 1701 and 1740 and since 1780.

1910 was the last known eruption of BÃ¡rÃ°arbunga before the 2014 eruptions.

The GjÃ¡lp fissure vent eruption in 1996 revealed that an interaction may exist between BÃ¡rÃ°arbunga and GrÃ­msvÃ¶tn. A strong earthquake in BÃ¡rÃ°arbunga, about 5 on the Richter scale, is believed to have started the eruption in GjÃ¡lp.

On 26 September 2010, an earthquake swarm was recorded with over 30 earthquakes measuring up to 3.7MW on the moment magnitude scale.

In August 2014, a swarm of around 1,600 earthquakes in 48-hours, with magnitudes up to 4.5MW, was followed on 23 August by the USGS Aviation Color Codes being raised from orange to red, indicating an eruption in progress. The following day, the aviation risk was lowered from red to orange and the statement that there was an eruption in progress was retracted. However, later aerial observations of glacial depressions southeast of the volcano suggested that the now-retracted report of an eruption had been correct and that a short eruption did occur under the ice, but the lack of further melting indicated that this eruption had now ceased. Then, a new fissure eruption breached the surface between BÃ¡rÃ°arbunga and Askja, in the Holuhraun lava field, in the early hours of 29 August. This was followed by a second fissure eruption in the Holuhraun area, along the same volcanic fissure, which started shortly after 4am on 31 August.

The eruption has emitted large volumes of sulphur dioxide and impacted air quality in Iceland. There was no effect on flights outside of the immediate vicinity as the eruption hasn't produced a significant amount of volcanic ash.

On February 28, 2015 it was officially reported that the eruption is over. Nevertheless, the gas pollution still exists, and the area north of BÃ¡rÃ°arbunga, including volcanoes Askja and HerÃ°ubreiÃ°, still remains closed for visitors.

On 14 September 1950 a Douglas C-54 Skymaster aircraft belonging to the Icelandic airline LoftleiÃ°ir made an emergency landing on the VatnajÃ¶kull glacier at BÃ¡rÃ°arbunga during a cargo flight from Luxembourg to ReykjavÃ­k. There were no fatalities, but damaged radio equipment left them unable to communicate their location. After two days the crew started the emergency SOS signal beacon in the rubber life-raft and a LoftleiÃ°ir Catalina aircraft spotted them. The C-54's cargo included the body of a deceased USAF colonel, prompting American assistance. A USAF C-47 equipped with skis landed on the glacier but was unable to take off again, so it had to be abandoned. After six days both crews were rescued by a ski-patrol from Akureyri. Later LoftleiÃ°ir bought the stranded C-47 from the USAF for $700. In April 1951 it was dug out of the snow and towed down the mountain by two bulldozers, where it was started and flown to Reykjavik.