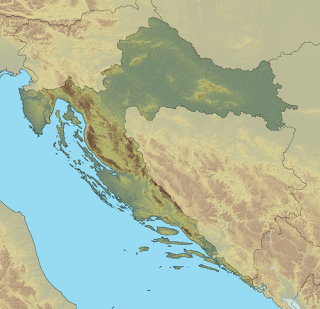 Dinara is a mountain located on the border of Bosnia and Herzegovina and Croatia. It has two major peaks: Troglav ("Threehead", 1913 m) and the eponymous Dinara (1831 m). The peak called Dinara is the highest peak of Croatia, is shaped like a human head made of stone, and also has a prominence of 728 m.

Its Latin name is Adrian oros while the current name is suspected to be derived from the name of an ancient Illyrian tribe that lived on the eastern slopes of the mountain.

It is best known for the fact that its name is the base for the name of a large mountain chain called the Dinaric Alps or Dinarides. The Dinarides are known for being composed of karst â€" limestone rocks â€" as is the mountain that named them.

Dinara itself spans from the Derala mountain pass (965 m) in the northwest to the Privija pass (1230 m) which is 20Â km to the southeast, where the KameÅ¡nica Mountain begins. The Dinara Mountain is up to 10Â km wide.

Dinara is located only a few dozen kilometers away from the Adriatic Sea, and is part of the Dalmatian hinterland, but the climate on Dinara is a much colder, mountain climate, making it one of the coldest places in Croatia with average temperatures between 2 and 4 Â°C at the peaks. The average precipitation is high, while the number of sunny hours per year ranges between 1,700 and 1,900.

There are no inhabited areas on the mountain itself and human presence consists mostly of small shacks that belong to the herdsmen from the nearby valleys such as that of the Cetina river.

One of the most fascinating massifs is on the southwestern slope. It is six kilometers long and up to 1700 meters high, providing an interesting landscape for the travelers on the roads in the valley below to view. The massif does not attract many climbers, but its OÅ¡ljak peak (1706 m) does.

Dinara is host to an endemic species of rodent, the Balkan snow vole (Dolomys bogdanovi longipedis), known in Croatian as the Dinarski miÅ¡ ("Dinara mouse"). It is an endangered species.