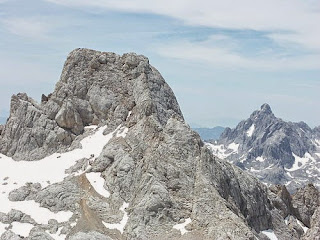 Torrecerredo or Torre de Cerredo (La Torre CerrÃ©u in Asturian language) is a mountain in northern Spain. It has an elevation of 2,650 metres; the highest peak of the Picos de Europa and the Cantabrian Mountains. Torrecerredo is located on the central massif of the Picos de Europa, called Urrieles, on the limits of Asturias and the LeÃ³n provinces. Its summit towers 2,200 metres over the river Cares, and offers wide views over the western massif and the Cares' tributaries.

The easiest ascent route starts at Jou de Cerredo, the last 200 metres are an easy rock climb that does not require special equipment. The most common approach uses the refuges of Jou de los Cabrones and Vega de Urriellu.