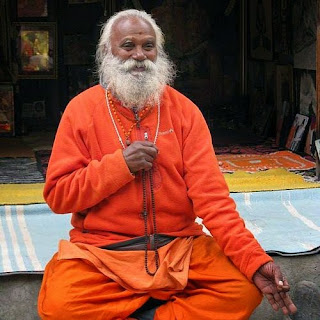 Swami Sundaranand (born 1926 in India) is a Yogi, photographer, author and mountaineer who lectures widely in India on threats to the Ganges River and the loss of Himalayan glaciers due to global warming.

Sundarananda was a student of the reclusive yoga master Swami Tapovan Maharaj (1889â€"1957), who wrote the classic yoga book Wanderings in the Himalayas (Himagiri Vihar) about yogic life in the Himalayas in the late 19th and early 20th centuries. Sundaranand lived with Swami Tapovan in the then inaccessible area of Gangotri at the source of the Ganges river, considered one of Indiaâ€™s most sacred places.

Since 1946, he has lived next to the Ganges in Gangotri, at 10,400 feet, in a modest hut (Kuti) which his master Swami Tapovan bequeathed to him on his death. Swami Sundaranand has lived there alone throughout the severest winters without any comforts or conveniences. He has witnessed up close the gradual shrinking of the Gangotri Glacier from which the Ganges springs forth, and has chronicled his devotion to the natural beauty of the Indian Himalayas as an accomplished photographer. A museum devoted to environmental protection and spiritual guidance, containing Swami Sundaranand's Himalayan photography, is now in the planning stages. It will be located in Gangotri on the property of Sundaranand and his master.

As an ascetic, he took the brahmacharya sadhu vow over 59 years ago and now devotes his life to a rigorous daily practice of meditation and spiritual practices. He continues to be a principal advocate for the ecological preservation of the Himalayas, the Ganges and its source at Gangotri.

Over 50 years, he has taken more than 100,000 photos of the shrinking Gangotri glacier in the Indian Himalayas. He now travels India raising awareness of the Gangotri's rapid demise.

"In 1949, when I first saw the glacier, I felt as if all my sins were washed away and I had truly attained rebirth. But now, it is impossible to experience that Ganga of the past."

Swami Sundaranand is also the subject of a feature documentary film produced by The Center for Healing Arts titled Personal Time with Swamiji. The film was directed and edited by Victor Demko and was shot at Sundaranand's home in Gangotri.

Swami Sundaranand is the author of the book Himalaya: Through the Lens of a Sadhu with over 425 photographs spanning 60 years of his work. He sought to capture the Eternal in Nature and to document the region as it once was with a special emphasis on planting the seeds of hope and inspiration to solve the environmental concerns of the area. A lookout point and plaque down river from Gangotri has been built and dedicated to the Swami's work and efforts. The book also contains a letter of endorsement from the former Indian Prime Minister Atal Bihari Vajpayee.

Over the past six decades, he has combined his interests to raise awareness about the Ganga. "When I first came to this region, it was one of the most beautiful part of the Himalayas," he says. "It is difficult to imagine the purity of the Ganga and the abundance of Himalayan vegetation and fauna that was prevalent then. We don't know what we have cruelly destroyed."

Swami Sundaranand has lived in Gangotri since 1948, when he became a renunciate and arrived here from Andhra Pradesh. A lot has changed since then, he says reflectively, even as he peels a stub of ginger in preparation for his lunch. The sun glistens on his deeply tanned body. Although the air is cold here, the sun is harsh. "It's becoming hotter every year," points out the sadhu. "People say it is global warming. I say it is a global warning."

The pollution of Ganga in the plains has been an oft-repeated refrain. But, according to Sundaranand, a graver threat is its pollution at the source. He attributes it to the unchecked construction of hotels and ashrams in Gangotri and dumping of waste â€" faecal matter and garbage â€" from these places directly into the Ganga. "There are no environment lovers left here, only money lovers," he quips. Every year, the temple town closes during the harsh winter months. Unchecked construction and felling of trees is at its peak then, according to the sadhu. "Many bhoj trees in Bhojbasa, en route to Gaumukh have been cut down. Earlier, on my treks to the Gaumukh glacier, I could spot rare animals like the snow leopard and musk deer. They are rarely visible now," he says.

The sadhu is also an avid mountaineer â€" it was during his treks to the glacier in the last 10-15 years, that he says he saw the glacier retreat more rapidly than it had ever done before. "Earlier, Gaumukh was barely 1 km away from Bhojbasa. Today, it is 4 kms away. Every year, the glacier is retreating by at least 10 metres," he says. Pollution of Ganga at its source and melting of the Himalayan glaciers are issues that environmentalists need to take up urgently, adds the sadhu. "Instead, they are busy opposing dams on the Ganga. That is hardly an issue," he fumes.

He has an intimate connection with the Himalayas that few others have. He is a mountain climber. He has climbed dozens of peaks in the Himalayas, several over 21,000 feet. He's lectured at Tensing's Himalayan Institute [a famous mountaineering school]. He is just a fabulous naturalist. He is intimate with thousands of Himalayan plants and knows a tremendous amount of lore and medicinal uses of these species. His perception of nature is acute. You can walk with him and his eye is so special. His ideas about weather patterns are so clear.

He does 3 hours of meditation during the day, and he likes to meditate at night in the early hours. The most important parts of his life are meditation, japa and pranayama. As a younger man he was an accomplished hatha yogi. He mastered 300 postures. He still does a half hour of hatha yoga a day. He is very devoted to the ecosystem in which he has lived for forty years. He believes â€˜God does not reside in temples or mosques, he is scattered everywhere in the courtyard of nature.â€™