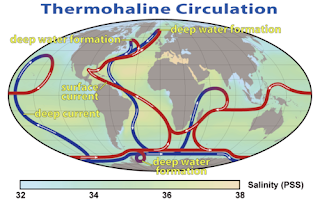 A shutdown or slowdown of the thermohaline circulation is a postulated effect of global warming. Global warming could, via a shutdown or slowdown of the thermohaline circulation, trigger localised cooling in the North Atlantic and lead to cooling, or lesser warming, in that region. This would particularly affect areas such as the British Isles, France and the Nordic countries, which are warmed by the North Atlantic drift. The chances of this occurring are unclear; there is some evidence for the stability of the Gulf Stream but a possible weakening of the North Atlantic drift; and there is evidence of warming in northern Europe and nearby seas, rather than the reverse. In coupled Atmosphere-Ocean General Circulation Models the THC tends to weaken somewhat rather than stop, and the warming effects outweigh the cooling, even over Europe.

Heat is transported from the equator polewards mostly by the atmosphere but also by ocean currents, with warm water near the surface and cold water at deeper levels. The best known segment of this circulation is the Gulf Stream, a wind-driven gyre, which transports warm water from the Caribbean northwards. A northwards branch of the Gulf Stream, the North Atlantic Drift, is part of the thermohaline circulation (THC), transporting warmth further north to the North Atlantic, where its effect in warming the atmosphere contributes to warming Europe. Other factors are also important, such as atmospheric waves that bring subtropical air further north, which have been suggested to influence the climate of the British Isles more than the Gulf Stream. The evaporation of ocean water in the North Atlantic increases the salinity of the water as well as cooling it, both actions increasing the density of water at the surface. The formation of sea ice further increases the salinity. This dense water then sinks and the circulation stream continues in a southerly direction. Global warming could lead to an increase in freshwater in the northern oceans, by melting glaciers in Greenland and by increasing precipitation, especially through Siberian rivers. It is by no means clear that sufficient freshwater could be provided to interrupt thermohaline circulation; the Younger Dryas are a period where this might have been the case, although there is some disagreement as to its cause.

Some even fear that global warming may be able to trigger the type of abrupt massive temperature shifts which occurred during the last glacial period: a series of Dansgaard-Oeschger events â€" rapid climate fluctuations â€" may be attributed to freshwater forcing at high latitude interrupting the THC. The Younger Dryas event may have been of this sort, too. (See the discussion of chaos theory for related ideas.) However, these events are believed to have been triggered by massive freshwater discharges from the Laurentide ice sheet, rather than from the melting of polar sea-ice and precipitation changes associated with the increased open water in global warming. Meltwater events aside, the climate deterioration into the last ice age appears to have taken about 5,000 years. Also, in coupled Atmosphere-Ocean General Circulation Models the THC tends to weaken somewhat rather than stop, and the warming effects outweigh the cooling, even locally: the IPCC Third Assessment Report notes that "even in models where the THC weakens, there is still a warming over Europe". Model runs in which the THC is forced to shut down do show cooling â€" locally up to 8Â Â°C (14Â Â°F)â€" although the largest anomalies occur over the North Atlantic, not over land. However, climate models are not sufficiently sophisticated at present to include climatic factors which give these predictions veracity; e.g., the recent return of deep convection to the subpolar gyre in both the Labrador and Irminger seas and the growing ice mass of Greenland.

Studies of the Florida Current suggest that the Gulf Stream weakens with cooling, being weakest (by ~10%) during the Little Ice Age.

In April 2004, the hypothesis that the Gulf Stream is switching off received a boost when a retrospective analysis of U.S. satellite data seemed to show a slowing of the North Atlantic Gyre, the northern swirl of the Gulf Stream.

In May 2005, Peter Wadhams reported in The Times of London about the results of investigations in a submarine under the Arctic ice sheet measuring the giant chimneys of cold dense water, in which the cold dense water normally sinks down to the sea bed and is replaced by warm water, forming one of the engines of the North Atlantic Drift. He and his team found the chimneys to have virtually disappeared. Normally there are seven to twelve giant columns, but Wadhams found only two giant columns, both extremely weak.

In 2008, Vage et al. reported "the return of deep convection to the subpolar gyre in both the Labrador and Irminger seas in the winter of 2007â€"2008," employing "profiling float data from the Argo program to document deep mixing," and "a variety of in situ, satellite and reanalysis data" to set the context for the phenomenon. This might have a lot to do with the observations of variations in cold water chimney behaviour.

In January 2010, the Gulf Stream briefly connected with the West Greenland Current after fluctuating for a few weeks due to an extreme negative phase of the Arctic oscillation, temporarily diverting it west of Greenland.

The NewScientist.com news service reported on 30 November 2005 that the National Oceanography Centre in the UK found a 30% reduction in the warm currents that carry water north from the Gulf Stream from the last such measurement in 1992. The authors note that currently the observed changes are "uncomfortably close" to the uncertainties in the measurements. However, the North Atlantic is currently warmer than in the earlier measurements. This suggests that either the circulation is not weakening, or that, even if it is weakening, the weakening is not having the hypothesised cooling effect, or that other factors are able to overwhelm any cooling.

The New Scientist article was based on an article in Nature. In News and Views in the same issue, Detlef Quadfasel reinforces the point that the uncertainty of the estimates of Bryden et al. is high, but says other factors and observations do support their results. Quadfasel continues by pointing out the significance of the possible implications, with palaeoclimate records showing drops of air temperature up to 10 Â°C within decades, linked to abrupt switches of ocean circulation when a certain threshold is reached. He concludes that further observations and modelling are crucial for providing early warning of a possible devastating breakdown of the circulation.

On 19 January 2006, a News Feature Climate change: A sea change by Quirin Schiermeier appeared in Nature, detailing reactions to the Bryden results. Points made by Schiermeier include the following: