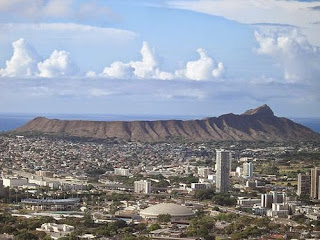 Diamond Head is the name of a volcanic tuff cone on the Hawaiian island of OÊ»ahu and known to Hawaiians as LÄ"Ê»ahi, most likely from lae 'browridge, promontory' plus Ê»ahi 'tuna' because the shape of the ridgeline resembles the shape of a tuna's dorsal fin. Its English name was given by British sailors in the 19th century, who mistook calcite crystals on the adjacent beach for diamonds.

Diamond Head is part of the complex of cones, vents, and their associated eruption flows that are collectively known to geologists as the Honolulu Volcanic Series, eruptions from the KoÊ»olau Volcano that took place long after the volcano formed and had gone dormant. The Honolulu Volcanic Series is a series of volcanic eruption events that created many of OÊ»ahu's well-known landmarks, including Punchbowl Crater, Hanauma Bay, Koko Head, and MÄnana Island in addition to Diamond Head.

Diamond Head, like the rest of the Honolulu Volcanics, is much younger than the main mass of the KoÊ»olau Mountain Range. While the KoÊ»olau Range is about 2.6 million years old, Diamond Head is estimated to be about 200,000 years old and inactive for 150,000 years.

The eruption that built up Diamond Head was probably very brief, lasting no more than a few days. It was probably explosive, since when the cinder cone was originally formed, the sea level is thought to have been higher and the vent burst erupted over a coral reef. Another factor probably contributing to the eruption's explosive nature was that rising magma would have come into contact with the water table. The eruption's relatively brief length is thought to explain why the cone today is so symmetrical.

Some people say that Diamond Head isn't a volcano. It is rather like a vent of the Ko'olau Range that was formed. After the eruption that formed Diamond Head, the Ko'olau Range became extinct. Punchbowl Crater and Koko Head is also considered as an extinct volcanic vent because it was formed around the time of the Honolulu Volcanic Series. None of these volcanic vents were formed by the Mount Ka'ala volcano though.

The interior and adjacent exterior areas were the home to Fort Ruger, the first United States military reservation on Hawaii. Only a National Guard facility and Hawaii State Civil Defense remain in the crater. An FAA air traffic control center was in operation from 1963 to 2001.

Diamond Head is a defining feature of the view known to residents and tourists of Waikiki. The volcanic tuff cone is a United States State Monument. While part of it is closed to the public and serves as a platform for antennas used by the U.S. government, the crater's proximity to Honolulu's resort hotels and beaches makes the rest of it a popular destination.

A 0.75-mile (1.1-km) hike leads to the edge of the crater's rim. Signs at the trailhead say that the hike takes 1.5â€"2 hours round-trip, and recommends that hikers bring water. Although not difficult, the signs also say that the hike is not a casual one: the mostly unpaved trail winds over uneven rock, ascends 74 steps, then through a tunnel and up another steep 99 steps. Next is a small lighted tunnel to a narrow spiral staircase (43 steps) inside a coastal artillery observation platform built in 1908. From the summit above the observation platform both Waikiki and the Pacific Ocean can be seen in detail. It is a short but steep hike â€" it is a 560 ft. elevation gain for a total elevation of 762 ft. There is a water fountain near the bathrooms at the foot of the trail in case you want to hydrate before the hike or fill an empty bottle. The park closes at 6pm and you are not allowed to head up the trail after 4:30pm.

The volcano is a symbol of the worldwide recognition of the Hawaiian Islands; because of this, Diamond Head is widely used for commercial purposes (see Diamond Head (disambiguation)). Many souvenirs from Hawaii and surf shop logos around the world bear the volcano's distinctive silhouette.

A 1975 televised game show, The Diamond Head Game was set at Diamond Head. The host was the game show main-stay, Bob Eubanks. Final contestants could step into a "Money Volcano" and catch flying bills of real money.

Several episodes of the 1980s television drama Magnum PI featured memorable car chases up and down the volcano.