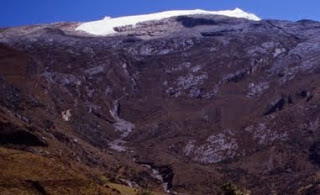 Ritacuba Blanco is the highest peak of Cordillera Oriental, in the Andes Mountains of Colombia. It's also named Ritak'uwa, an ancient name from the U'wa indigenous people that live in the lowlands of the National Park Sierra Nevada del Cocuy y GÃ¼icÃ¡n, where the Ritacuba Blanco is located. The summit is accessible from the west via the town of El Cocuy, the village of GÃ¼icÃ¡n and the hamlet of Las CabaÃ±as. The hike is fairly easy, but weather is not reliable, and a glacier must be crossed. Because of global warming, its glacier is melting at very high rates, backing down 25 linear mts per year; same is happening at amazing speeds to all other snow-covered tropical mountains in Colombia. In 1950, Ritacuba Blanco's glacier extended down to 4,500 metres (14,800Â ft) above sea level; in January 2007 its lowest point was at 4,800 metres (15,700Â ft) above sea level. If this melting rate continues, the glacier is expected to disappear before 2025.