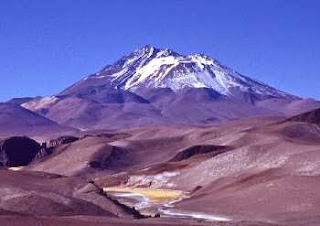 Llullaillaco is a potentially active stratovolcano at the border of Argentina (Salta Province) and Chile. It lies in the Puna de Atacama, a region of very high volcanic peaks on a high plateau within the Atacama Desert, one of the driest places in the world. It is the fourth highest volcano in the world, and it is also the seventh highest mountain of the Andes.

Llullaillaco follows the typical Puna de Atacama volcano pattern: it is surrounded by large debris fields and is perpetually capped by small snow patches, though there are no true glaciers due to the extreme aridity. The snow line in this region is the highest in the world, at around 6,500 metres (21,300Â ft), which is around 1,000 metres (3,300Â ft) higher than in the Himalayas and 2,000 metres (6,600Â ft) higher than in the Andes of Colombia and Ecuador.

The peak's name comes from the Aymara for "murky water": llulla= dirty and yacu= water. Other sources propose it to have originated from Quechua Lullac= lie, Yacu= water: "lying (or treacherous) water".

It has been confirmed that Incas climbed Llullaillaco in the pre-Columbian period. Artifacts on the summit constitute the highest evidence of human presence worldwide before the late nineteenth century. Also, the huÃ¡queros may have also reached its summit and those of other mountains in the region during their searches. The first recorded ascent was on December 1, 1952, by BiÃ³n GonzÃ¡lez and Juan Harseim.

There are several climbing routes that do not require specialized climbing techniques, although the altitude imposes great difficulty and is in itself a dangerous factor. Crampons and an ice axe are needed as most paths cross ice patches.

Land mines installed during the Argentina-Chile conflict of 1978â€"1982 are an additional danger on the Chilean side of the mountain.

During 1983â€"1985, American archaeologist Dr. Johan Reinhard directed three surveys of archaeological sites on the summit and slopes of the mountain.

In 1999 on Llullaillaco's summit, an Argentine-Peruvian expedition co-directed by Johan Reinhard and Argentine archaeologist Constanza Ceruti found the preserved bodies of three Inca children, sacrificed approximately 500Â years earlier. This is the highest Inca burial so far discovered in Tawantinsuyu and is the world's highest archaeological site.

According to contemporary writings by Spanish priests, these children were participants in capacocha, a sacrificial rite that occurred in celebration of key events in the life of the Inca emperor.

The mummies are those of a teenage girl, nicknamed La doncella ("the maiden"), a young boy, and a six-year-old girl, nicknamed La niÃ±a del rayo ("the lightning girl"). The latter's nickname reflects the fact that sometime during the 500-year period the mummy spent on the summit, it was struck by lightning, partially burning the preserved body and some of the ceremonial artifacts left with the mummies.

The three mummies are exhibited at the Museum of High Altitude Archaeology (MAAM) in Salta, Argentina, in a rotating fashion, so as not to expose any of the mummies for too long a time at once. Mummies are typically rotated in the exhibit every six months.

Biological analysis of the these mummies published in 2013 found significant lifestyle and diet evidence, which included increased coca and alcohol consumption in the year prior to their sacrifices.

Two major geological stages can be highlighted in the history of the volcano: Llullaillaco I, the ancestral primary volcano, dates back to the Pleistocene. Two very eroded cones with associated lava flows, up to 20Â km in length, distributed mainly to the West, evidence these stages.

Built upon it, there is a well-preserved secondary post-glacial edifice called Llullaillaco II, which has been active during human history. Many Holocene lava flows are associated with this latter phase; the two most notable are directed north and south of the volcano. These youthful-looking dacitic flows have been dated to be of late Pleistocene age. Moreover, hot avalanche deposits, extending up to 3Â km, are associated with one of the southern lava flows. There are still other very conspicuous flows remaining: one of the most striking, apparently caused by partial collapse of Llullaillaco I about 150,000Â years ago, extends eastward into Argentina, diverging around the Cerro Rosado stratovolcano 17Â km to the East and terminating in the Salar del Llullaillaco. This deposit has not yet been thoroughly studied.

There are reports of eruptions in 1854, 1868, and 1877, possibly causing the youngest lava flows in the area, which are easily recognizable because of their very dark appearance.